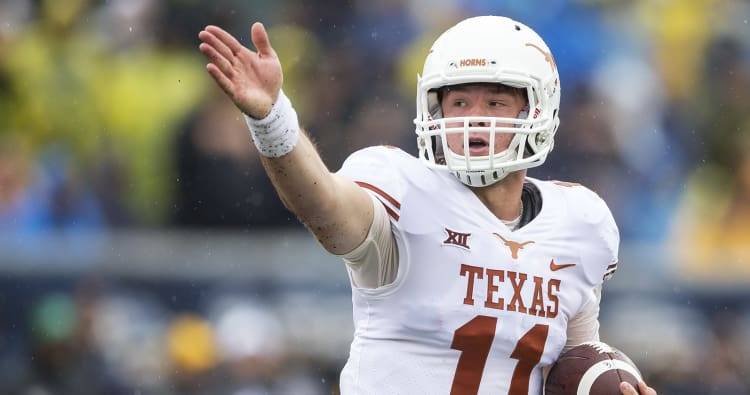 The last time Texas finished a season with a winning record, Mack Brown was still roaming the sidelines. The Longhorns will get two cracks at fixing that, starting with a matchup Friday against Texas Tech.

The Red Raiders (5-6, 2-6 Big 12) have plenty riding on their regular season finale too, particularly for coach Kliff Kingsbury. Missing a bowl in back-to-back seasons could be the last thing he does as the head man in Lubbock.

The Longhorns (6-5, 5-3) will finish no worse than a tie for third in the conference with a win, no small feat considering a 3-3 start to the league slate.

RELATED: Now chugging with momentum, Texas has no reason to let up against Red Raiders

Weather: The forecast calls for a high temperature of 78 degrees, dipping to 51 degrees after sunset — which is at 5:31 p.m. Clear skies and a light wind are expected.

The line: Texas is a 10-point favorite to beat Texas Tech.

Which TV channel is Texas-Texas Tech on?

The game between Texas and Texas Tech in Week 13 is on FOX. Tim Brando (play-by-play), Spencer Tillman (analyst) and Holly Sonders (sideline) will be the announcers.

How can I watch the Texas-Texas Tech game online?

The game between Texas and Texas Tech will be streamed live on FOXSportsGo.com and via the FOXSportsGo app. You can access the broadcast with a cable subscription login.

How can I listen to the Texas-Texas Tech game on the radio?

The Texas-Texas Tech game in Week 13 will air live on the Longhorn IMG Radio Network. In Austin, the local radio affiliate is 104.9 The Horn. A full list of Longhorns radio affiliates can be found here, or you can click the play button below to listen online.

Outside of a few bad mistakes, Texas quarterback Sam Ehlinger has had a stellar freshman season. Unfortunately, those few mistakes have been costly. A fumble against USC and interception against Oklahoma State essentially sunk the Longhorns’ hopes of winning those games. Last week, he threw a bad pick-six that let West Virginia hang around. The errors seem to be the cost of doing business with a brash and inexperienced quarterback, and Ehlinger has made his share of big plays to make up for them. Can he avoid the big mistake on Friday?

Texas sends off 13 seniors who will be playing their final game at Royal-Memorial Stadium, including standouts Poona Ford, Antwuan Davis, Lorenzo Joe and Dorian Leonard. The class has combined to play in 371 games, starting 158. Others who could be playing their last game in burnt orange include left tackle Connor Williams, linebacker Malik Jefferson and punter Michael Dickson.

Texas has spent most of the season searching for a presence in the running game, and it might have finally found its man. Freshman Daniel Young continued his breakout last week by rushing for a career-high 85 yards on 12 carries. He also caught 3 passes. Young benefited from the return of Williams along the offensive line, and the threat of Ehlinger taking off kept the Mountaineers defense guessing. If Young has another big game against Tech, he could go into bowl season with some real buzz.

The Eyes of Texas: 3 Red Raiders the Horns will be watching