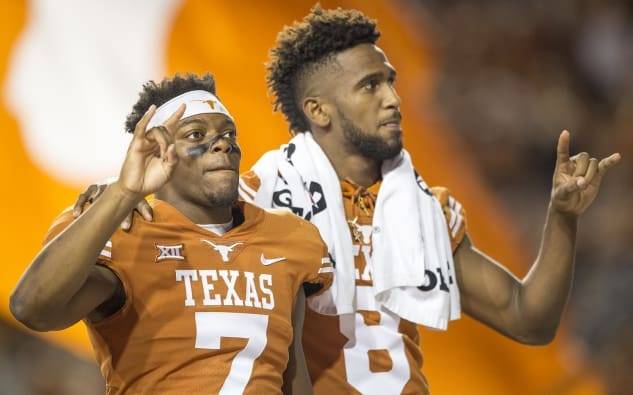 There were 163 snaps taken in Texas’ 27-23 loss to Texas Tech on Friday. Here are five that ended up making a big difference:

Texas honored 13 seniors – and a handful of juniors – before their final game at Royal-Memorial Stadium. A few of those seniors then led UT to an early lead.

The touchdown catch was Foreman’s team-leading fourth of the year, and he led UT against the Red Raiders in catches (five) and receiving yards (78). Foreman, however, inexplicably disappeared from Texas’ game plan until the end of the third quarter, which seemingly followed the script for his curious senior season.

Texas cornerback Kris Boyd continued his personal vendetta against Red Raider quarterbacks in the second quarter when he intercepted McLane Carter, who was his teammate on Gilmer High’s 2014 Class 4A, Division II title team. Boyd returned the football 44 yards to the Texas Tech 9. The interception led to Daniel Young’s touchdown run and a 17-10 lead for Texas.

On Friday, Texas also got four pass breakups from safety DeShon Elliott and an interception from Davante Davis. That gave UT 48 pass breakups and 15 interceptions this season. Texas Tech threw for 333 yards, which bumped the UT defense’s average up to 257.9 per game.

Texas junior Michael Dickson punted nine times against Texas Tech, and he averaged 50.9 yards with a long of 67. His nicest kick, however, might have been his second-shortest.

In the third quarter, Dickson got off a 34-yard punt that UT freshman Josh Thompson caught at the Texas Tech 1. Dickson landed seven of his punts inside the Red Raiders’ 20. The Ray Guy Award finalist maintained his lead among the nation’s punters (48.4 yards per punt).

Sam Ehlinger started for the first time since Oct. 21 and accounted for 239 passing yards, 35 rushing yards and 27 receiving yards. The freshman’s evening, however, was undone by two fourth-quarter interceptions.

The first pick was the costliest for Texas. Leading 23-20 and facing a third-and-2 at the Texas Tech 37 with just over 2 minutes to play, Texas decided to pass for the first down. (UT averaged 3.5 yards per rush on Friday.) A throw to Foreman ended up in the hands of Texas Tech defensive back Justus Parker, who produced a 55-yard return to the Texas 14.

Ehlinger is Texas’ leading passer and rusher this season. He also has nine turnovers, two of which ended overtime losses to USC and Oklahoma State.

Texas sacked Nic Shimonek on the play after Ehlinger’s interception, and the two teams traded timeouts. Shimonek then found Cameron Batson for a 16-yard touchdown. Elliott, who is a finalist for the Jim Thorpe Award, appeared to slip in coverage on the play.

Shimonek entered the week as the nation’s eighth-leading passer but was benched until the fourth quarter. He completed four of his eight passes and threw for 96 yards and two touchdowns.

Shimonek, who entered the game with the Red Raiders trailing 23-13, left 1:47 on the clock on his final throw. Texas (6-6) then drove to the Texas Tech 42, but Douglas Coleman III sealed a bowl berth for Texas Tech (6-6) with an interception of Ehlinger.

After staggering to 6-6, Texas coach Tom Herman facing questions; ‘I don’t have a good answer for you’