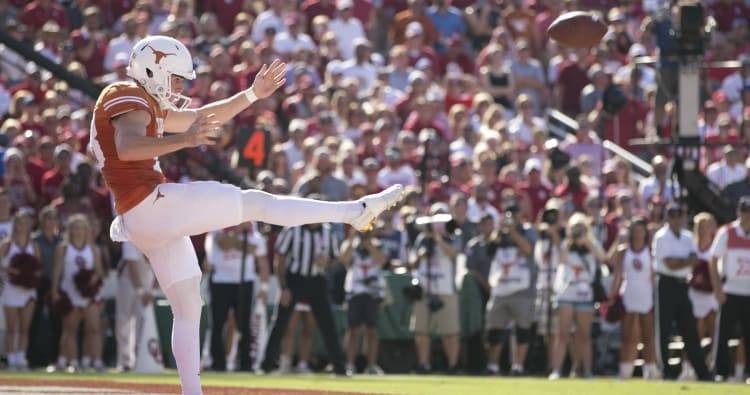 Welcome to Big 12 DieHards’ Week 13 Special Teams Player of the Week. There were several outstanding performances from special teams players around the conference, but one stood apart.

Also, check out our other Big 12 player of the week awards:

Having a punter be the best player on a team sounds sort of ridiculous. Especially at Texas, it sounds like a tremendous insult. It shouldn’t. Michael Dickson is legitimately that good.

Dickson punted nine times against Texas Tech on Friday night in Austin. The punts traveled an average of 50.9 yards per punt, which only improved his nation-leading punting mark of 48.4 yards per punt. Out of the nine punts, seven fell within the 20-yard line. Five of the punts traveled more than 50 yards, including a booming 67-yard punt.

More importantly, Texas Tech’s offense was virtually incapacitated following Dickson’s punts. Texas Tech punted after six of Dickson’s nine punts. One other ended in an interception. In fact, only two of Texas Tech’s scoring drives came off punts, and the Red Raiders started at the 19-yard line and 12-yard line for those drives. Five Texas Tech drives off Dickson punts went 3-and-out.

Field position is important to fielding a quality defense. Dickson ensures that almost every team starts in poor territory against the Longhorn defense. Even though Texas lost 27-23 to Texas Tech, Dickson’s value only continues to become clearer.

After staggering to 6-6, Texas coach Tom Herman facing questions; ‘I don’t have a good answer for you’