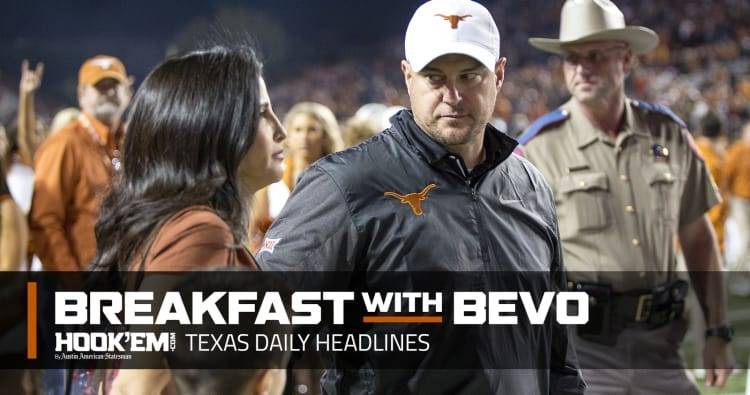 Tom Herman, dazed with no answers

After the Friday night upset loss to Texas Tech, coach Tom Herman took questions from media members and seemed to be in a daze. As the Austin American-Statesman’s Brian Davis points out, he “was visibly shaken,” and had no reasons for a home loss to a double-digit underdog in the Red Raiders. The swaggering, swash-buckling savior from Houston doesn’t stick his chest out anymore.

Despite the Longhorns scoring five points in the final 10 seconds of regulation time to force overtime, Texas couldn’t maintain momentum and dropped their second consecutive game in overtime, 76-71. No. 17 Gonzaga was just too much for the Longhorns, who got a stellar game from point guard Matt Coleman. He lead Texas with 19 points and four assists.

Coach Jerritt Elliott’s team raced its way to an undefeated Big 12 championship, but the Longhorns’ 24-2 overall record did not push them to a top overall seed in the NCAA tournament that starts this week. Texas ended up with the sixth seed in the field. They will host the first two rounds in Gregory Gym, but if the Longhorns are going to advance to the Final Four, they’ll do so in the West region hosted by Stanford.

Orlando out, Houston or Memphis to front for bowl possibilities

With the Tech loss knocking the Longhorns to 6-6, the Austin American-Statesman’s Kirk Bohls checked in with bowl reps over the weekend. Camping and Texas bowls spokespersons chimed in on where they stand with an invite to Herman’s squad.

Hookem.com’s Danny Davis puts together his five key plays from the game on Saturday that were an integral part in the Longhorns’ 27-23 loss.

Texas notebook: It was senior night, but some juniors possibly bid farewell to DKR as well

The post Tom Herman has no answers for loss to Tech; Texas drops game to Gonzaga appeared first on Hook ‘Em.