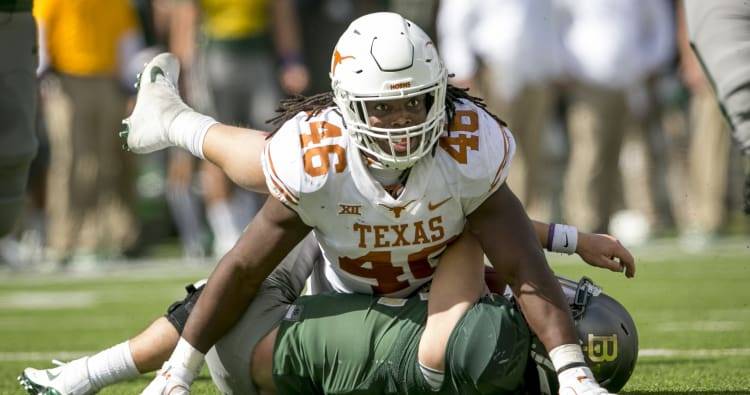 On Tuesday afternoon, Jefferson shot down a report that he had decided to enter the NFL Draft. Bleacher Report’s Matt Miller tweeted on Tuesday that both Jefferson and safety DeShon Elliott would turn pro and skip UT’s bowl game. A few minutes after Miller’s tweet, Jefferson went online to refute that claim.

I have not made a decision. My family and I are discussing my choices moving forward, thank you.

The tone of Jefferson’s tweet didn’t stray from his recent public statements. Following last week’s loss to Texas Tech, Jefferson acknowledged that he may have played his final game at Royal-Memorial Stadium. Jefferson, however, said he wanted to discuss his future with his family.

A 6-3, 240-pound linebacker, Jefferson leads Texas with his 110 tackles. The former five-star recruit has appeared as a first-round pick on some mock drafts. (Miller had him as the 29th overall pick in his most-recent predictions).

Jefferson’s public denial comes a day after offensive lineman Connor Williams traded his final year of eligibility for an entry into the NFL Draft. Underclassmen like Jefferson, Elliott, cornerback Holton Hill and punter Michael Dickson are among the other pro prospects on UT’s roster. Those players, though, have not announced whether they’ll enter the draft or return to Texas.

The post Texas standout Malik Jefferson refutes report that he’s made up his mind about NFL Draft appeared first on Hook ‘Em.