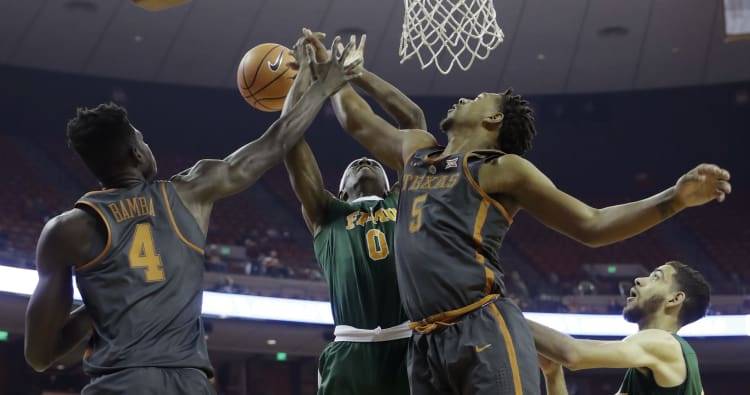 It’s easy to get jacked up for big games, like those against top-ranked Duke. But Texas arguably played down to its competition on Wednesday against Florida A&M.

The Longhorns came away with a 82-58 victory over the 1-8 Rattlers, one of the worst scoring teams in Division I. But it sure looked awkward at times as Texas (5-2) made just 4 of 19 shots from 3-point range while letting Dylan Osetkowski have a field day inside.

The junior did a little bit of everything, getting 19 points on 8 of 11 shooting and eight rebounds in 21 minutes. He was the Longhorns’ offense for most of the game. By the time it was over, Texas had three more players in double figures — Andrew Jones (14 points), Kerwin Roach Jr. (11) and Mo Bamba (10).

On Monday, coach Shaka Smart said Osetkowski was asserting himself offensively. The junior was all over the place against the Rattlers. He got two early steals via the full-court press and generally had his way inside.

Most offensive possessions went through him, and Osetkowski showed the all-out hustle that will make him a household name when Big 12 play starts. His reverse slam with 17:47 remaining was excellent.

At halftime, school officials honored the 1977-78 Texas squad, a group that went undefeated at home under first-year coach Abe Lemons. Johnny Moore, UT’s all-time leader in assists, made the first basket in Erwin Center history in what became an 83-76 win over Oklahoma.

“We had a no-quit attitude,” Moore said in a pre-game interview. “We continued to work hard, and when you work hard, you’re going to get the rewards from that.”

This would’ve been a great night to work on outside shooting. The Longhorns are struggling in that department, unfortunately. Texas was 1 for 13 from beyond the arc in the first half in what was then a nine-point game.

It’s easier to track the made shots rather than those missed. Jones hit a 3-pointer with 15:47 left in the first half while Roach hit one from the left corner with 15:45 remaining. Jones also connected again with 9:17 left, and then Bamba drained one from the top of the key with 4:13 to go.

This team’s shooting inconsistencies must be maddening for the Texas coaching staff. For example, the Horns missed 11 of their final 12 shots of the first half. Then, they came back after the break and made their first six in a row. Later on in the half, Texas made eight of nine shots and eventually had a 20-point lead with relative ease.

Coach Shaka Smart will soon learn whether you can really go home or not. Texas’ next game will be Tuesday at Virginia Commonwealth, the school Smart led to the 2011 Final Four and 163 victories over six seasons before coming to Austin. VCU is riding a string of 103 consecutive sellouts, a streak Smart started. The Horns are walking into a hornet’s nest.

The Whys of Texas: Super-sized mailbag takes us on a 6-6 roller-coaster of emotions