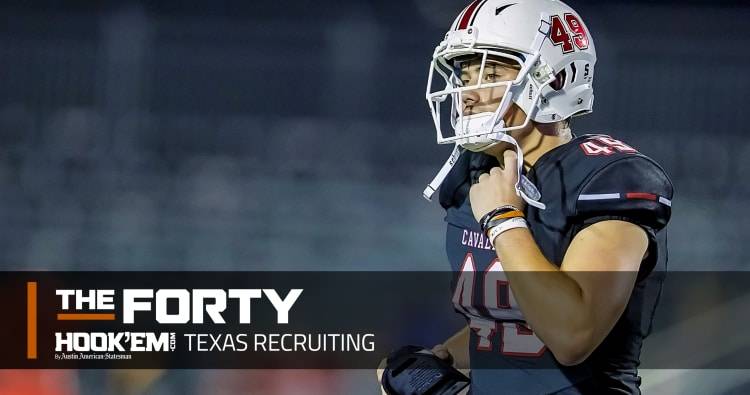 The longest kick made by a Longhorns kicker at home this season was a 40-yarder by Joshua Rowland in the loss to Texas Tech the day last Friday. The next day, Lake Travis place kicker and Texas commit Cameron Dicker made his debut at Royal-Memorial Stadium in a Class 6A area playoff game.

Dicker proved comfortable on his future home field, nailing a 48-yard field goal with room to spare. He also went 2 for 2 on point after attempts. Dicker did pull a 46-yard attempt later in the game to finish 1 of 2 on field goals.

“It was definitely awesome to kick at my future stadium,” Dicker said after the game. “It is a way for me to build confidence in this stadium. There will be more fans here the next time I kick, but I enjoyed the experience.”

Dicker committed to Texas in May. The former soccer player possesses a powerful leg capable of turning every kickoff into a touchback.

“Cameron is an incredible weapon for us,” said Lake Travis coach Hank Carter. “For a defense to get to start at the 25-yard line on each possession after a score is an advantage most high schools don’t get. He also helps us in the punt game.”

There are no plans to use Dicker as a punter at Texas. He’ll compete for the starting spot as the place kicker and on kick offs. The plan when Dicker committed was to redshirt his freshman season while Rowland played out his eligibility in 2018. The struggles in the kicking game mean Dicker needs to be ready to compete next summer.

“I’m ready to do what Texas needs from me as a freshman,” he said. “If I’m the best kicker for the job, that is great.”

The junior campaign was easier for Texas safety commit Caden Sterns and his Cibolo Steele team. The Knights breezed to last year’s district championship and eventually into the Class 6A Division II state championship game before falling to DeSoto.

The start of the 2017 season was rocky for Steele. The Knights lost four straight games and were 1-5 with four games to go before the playoffs began. Steele hasn’t lost since and the defense is the main reason. The unit hasn’t yielded more than 20 points in a game since the seven-game winning streak began against New Braunfels on Oct. 13.

“We’re playing our best football at the right time,” Sterns said after his team knocked off Vandegrift 36-18 last Friday. “The young guys on this team are growing up and I’m proud to watch the evolution of this team, and especially the secondary.”

Sterns finds himself a leader in the secondary. He’s a senior and the No. 2-ranked player on the Fabulous 55. He’s arguably the top prospect to come out of the San Antonio area in years and he’ll enroll early at Texas to compete at cornerback and safety.

“The plan is to start at cornerback and work on my technique at that position. Safety comes naturally for me since it is the position I play,” he said. “I can always be comfortable with a move back to safety. Learning the cornerback position will help me be more versatile.”

Sterns is part of a special secondary group committed to Texas. The Longhorns want to add one more, 5-star Anthony Cook, before national signing day. Cook will choose between LSU, Ohio State and Texas.

Sterns made his prediction.

“I think he picks Texas,” he said. “It’d be great to add him to the secondary class. It’s already the best in the nation and he’d make it unbelievable.”

The new early signing period speeds up the recruiting process. All 2018 prospects, not just JUCO commits and early-enrollees, can sign from Dec. 20 to Dec. 22 if preferred. Prospects also can still wait until the normal national signing day in February.

Most colleges, including Texas, want all committed prospects to sign a national letter of intent during the newly-formed December signing day. That would mean coaching staffs across the nation could turn the bulk of their recruiting attention to the 2019 group.

One player the Longhorns already liked enough to extend an offer is Converse Judson defensive lineman DeMarvin Leal. The junior ranked No. 15 on the Next 25 and will be a future Fabulous 55 member. The 4-star prospect is listed as a defensive tackle on most recruiting sites, but he prefers a different position.

“I’d say I prefer to play defensive end,” Leal said after Judson fell to Lake Travis last Saturday at DKR. “I’m open to playing defensive tackle, but I prefer to be on the outside if possible.”

The 6-4, 275-pound prospect likes Texas. The system defensive coordinator Todd Orlando runs would allow him to play end, much like Malcolm Roach. The big-bodied prospect impressed on Saturday and enjoyed playing at the home of the Longhorns.

“It was an awesome experience because Texas is a team that will be in my top five when I narrow down my list, and I got a chance to see what it was like to play in the stadium,” Leal said. “Texas is definitely one of my top schools and I’ll start looking more at recruiting now that my season is over.”

Texas basketball signee Brock Cunningham is a force on the boards