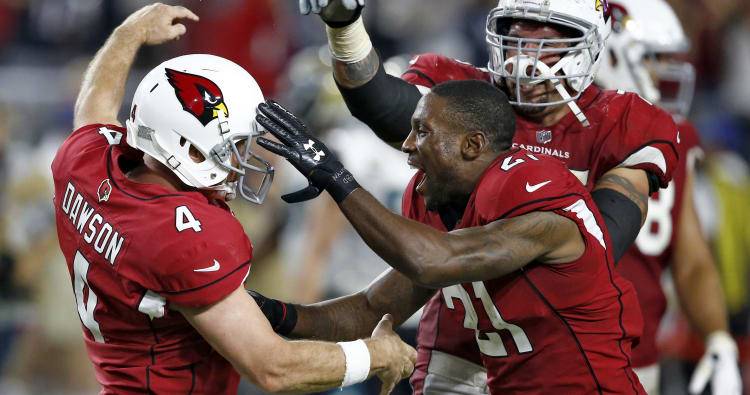 He’s been kicking for 19 seasons, but Phil Dawson of the Cardinals decided this was the year he’d kick his longest field goal. Dawson blasted a kick 57 yards to give the Cardinals a 27-24 win over the Jaguars in Week 12. Ever the veteran, Dawson waived his teammates off the field as they rushed him from the sideline because there was still one second left on the game clock. The kicker didn’t want a penalty to hurt his team’s chance to seal the win on the ensuing kickoff. Dawson was 4-for-4 on field goals and made an extra point in the game. He even recorded a tackle. The win puts the Cardinals at 5-6 with an outside chance at a playoff spot.

Adrian Phillips and the Chargers put a beating on the Cowboys as they won 28-6. The Chargers intercepted Dak Prescott twice, a week after recording five picks in the win over Buffalo. Phillips tied for the lead in tackles with seven on Thanksgiving.

Brian Orakpo made four tackles and had 1.5 sacks as the Titans defeated the Colts 20-16 to take the lead in the AFC South. Orakpo also hit the quarterback twice as he helped Tennessee hold the Colts to just 254 yards of offense. He has 31 tackles this season and has forced a career-high three fumbles.

Earl Thomas, S, Seahawks—Thomas returned from injury in Week 11 and helped the Seahawks win in Week 12, 24-13 over the 49ers.

Marquise Goodwin, WR, 49ers—Goodwin has strung together a few solid performances in a row. The 49ers lost to the Seahawks, but Goodwin did make four catches for 78 yards.

Justin Tucker, K, Ravens—Tucker went went 3-for-3 on field goals and connected on both extra-point attempts as the Ravens held on to defeat the Texans 23-16.

Sam Acho, LB, Bears—Acho made four tackles and even handled a short kick return as the Bears were dominated by the Eagles, 24-3.

Nick Rose, K, Redskins—Rose was perfect on the day, making both field goal attempts as well as connecting on both extra points he tried. The Redskins won 20-10 over the Giants.

Trey Hopkins, OG, Bengals—Hopkins and the Bengals dominated the Browns in Week 12. The Bengals rushed for 152 yards in the 30-16 win. Hopkins was in on 61 offensive snaps.

Fozzy Whittaker, RB, Panthers—Whittaker returned two kickoffs for the Panthers, gaining a total of 49 yards on those returns. Carolina improved to 8-3 as it topped the Jets 35-27.

Derrick Johnson, LB, Chiefs—Johnson made three tackles, but the Chiefs can’t seem to figure out how to win again. They fell 16-10 to the Bills and have lost five of their last six games.

Quandre Diggs, CB, Lions—Diggs made two tackles, including a tackle for loss, but the Lions couldn’t get over the hump against a tough Vikings squad.

Malcom Brown, DT, Patriots—Brown missed three games with an ankle injury before returning to action in Week 12. He played in 26 defensive snaps on his way to making two tackles in the 35-17 win over the Dolphins.

Jamaal Charles, RB, Broncos—Charles had just three touches in the game, rushing once for three yards and catching two passes for seven more. His Broncos lost 21-14 to the Raiders.

Marcus Johnson, WR, Eagles—Johnson was inactive for the 24-3 win over the Bears.

Lamarr Houston, LB, Texans—Houston was released by the Texans on Tuesday, according to Ian Rapoport of the NFL Network. After losing on Monday night it appears the Texans will focus on getting their younger players experience. Houston joined the Texans on Oct. 11 to help with their defensive injuries. He had seven tackles, one sack and one forced fumble with the Texans. The highlight of his stay in Houston was this scoop and score against the Colts in Week 9.

Hassan Ridgeway, DT, Colts—Ridgeway missed his first game due to a shoulder injury. He was unable to help the Colts avoid the loss against the Titans.

Brian Robison, DE, Vikings—Robison played in 16 defensive snaps as his Vikings won their seventh straight game. The Vikings defeated the Lions on Thanksgiving 30-23.

Colt McCoy, QB, Redskins—McCoy, didn’t make an appearance in the 20-10 win over the Giants.

Malcolm Brown, RB, Rams—Brown sprained his MCL in Week 9 and has missed the last three games for the Rams.

The post Longhorns in the NFL: Week 12 highlighted by career-long FG appeared first on Hook ‘Em.