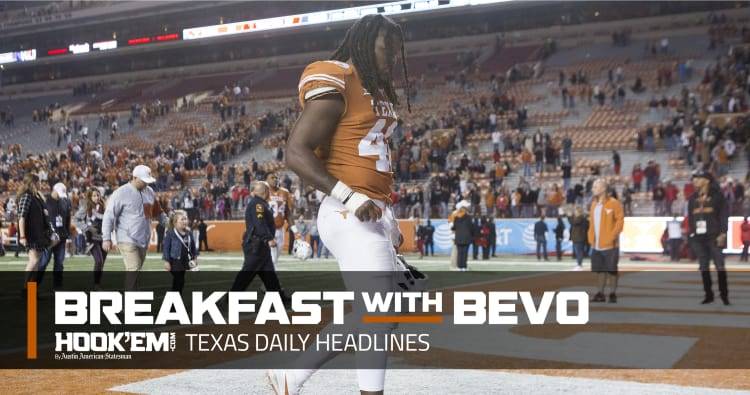 Longhorns sports fans are probably tired of hearing about moral victories. They’ve seen them in football—an overtime loss to USC to start the season—and now they’ve seen them in the basketball team’s two overtime losses at the PK80 Invitational over the weekend. There are definite differences, however. Whereas the football team started the year with most of the same players, the basketball team has standout freshman and a transfer igniting the squad. Coach Shaka Smart noted how upset the team was after blowing a 16-point lead against the top-ranked Blue Devils. That in itself may signal progress, writes Texas beat writer Brian Davis. The Longhorns will try to get back in the win column as they take on Florida A&M Wednesday at the Erwin Center.

After a report surfaced claiming that Malik Jefferson and safety DeShon Elliott would enter the NFL draft, the junior linebacker tweeted his current stance on the matter. Jefferson kissed the Longhorns logo as he walked off the field after the Friday loss to Texas Tech. He led the Longhorns with 110 tackles this season and has made appearances high in some mock drafts.

Pro Football Focus named Kris Boyd to its Big 12 team of the week for Week 13 of the college football season. The cornerback made 6 tackles, defended 5 passes and made an interception against Texas Tech. His 98.6 rating was a highlight of the squad this week. Boyd finished the regular season with 51 tackles and 14 passes defended.

With a national recruiting ranking in the top-10, Kevin Sumlin did well before the Aggies fired him. Now that he’s gone from Texas A&M, the Longhorns might take a shot at poaching some talent. Hookem.com recruiting reporter Mike Craven outlines a few prospects the Longhorns may pursue. In addition, the new development may make anyone on the fence think even harder about their decision.

According to John Gambadoro of Arizona Sports 98.7, Mack Brown said he has one run left in him. Brown said he would definitely be interested if Arizona State wanted to talk. He hasn’t coached since 2013 and has been with ESPN since then. Brown went 134-34 at Texas.

Longhorns in the NFL: Week 12 highlighted by career-long FG