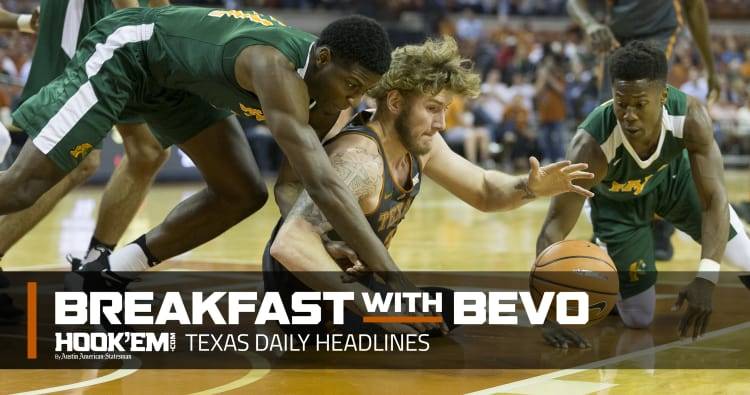 Longhorns win with room for improvement

The men’s basketball team let Florida A&M hang around a little longer than they wanted as they eventually won by 24 points. The final score looks good, but it hides a rough shooting night for the Longhorns, especially from long range. Texas made just four of 19 3-pointers and sank not even half of their free throws. When asked why his team seemed down after the win, coach Shaka Smart said, “’cause I jumped their ass in the locker room. Oh, they listened.”

The Whys of Texas: A roller-coaster of emotions

Texas football beat writer Brian Davis had a hefty mailbag this week as Longhorns fans had to process falling to Texas Tech in the regular season finale. Some fans were disappointed and sickened by the result. Others think Sam Ehlinger would make a better running back than quarterback. With the amount of game-changing mistakes Ehlinger has made this season, Davis writes it’s possible the Longhorns’ quarterback of the future isn’t on campus yet.

Help on the way at kicker

This season the Longhorns longest field goal at home went 40 yards. Joshua Rowland hit that field goal in the season finale the day after Thanksgiving. A day later, Cameron Dicker, Lake Travis’ place kicker that’s committed to play for Texas, nailed a 48-yarder in a playoff win at Royal-Memorial Stadium. Though Dicker went 1-for-2 on the day, he was comfortable kicking in his future home stadium. Originally expected to redshirt next season, Dicker may have to see action sooner rather than later.

Brock Cunningham, who plays for Austin Westlake, is a force on the boards. The 6-foot-7 senior will join the Longhorns next season and is making an attempt to lure teammate Will Baker along for the ride. The two engage in friendly competition for rebounds while leading the Chaparrals to blowout wins. Cunningham most recently scored 14 points and pulled down 14 rebounds in a 75-47 win over Austin Anderson.

On Second Thought Ep 81: Brian Davis on Tom Herman’s Year One; Dennis Dodd on the CFP