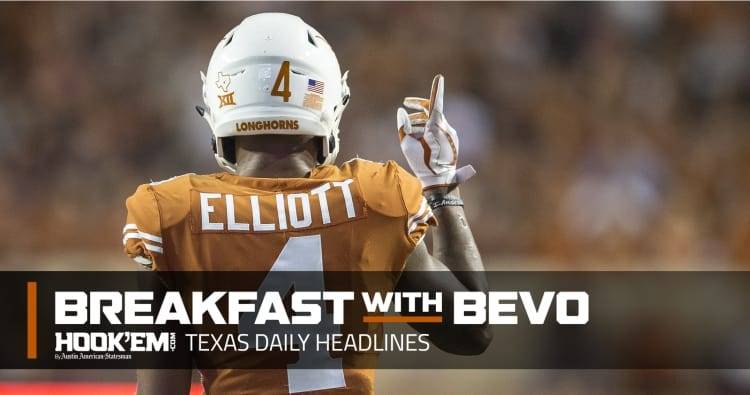 Jim Thorpe Award finalist DeShon Elliott will skip the Longhorns bowl game and prepare for the NFL draft, he announced on Thursday. The junior safety had 6 interceptions this season. He joins left tackle Connor Williams among players declaring for the draft. The safety credited former coach Charlie Strong and current coach Tom Herman for the opportunity and the success he’s had at Texas.

A stern Shaka Smart has the right idea

Columnist Kirk Bohls, along with a room full of media members, noticed Shaka Smart was hoarse after the Wednesday win over Florida A&M. The reason? He just laid into his team after they won a game by 24 points. Bohls writes that Smart was correct in giving his team a verbal notice they weren’t playing to an acceptable level. Smart will need to be authentic, angry and all in if Texas wants to be better than last season’s 11-22 record, Bohls says.

American-Statesman columnists Kirk Bohls and Cedric Golden welcome Texas beat writer Brian Davis as they talk about Tom Herman’s first year on the 40 acres. They talk about the up-and-down nature of the season and how Texas will respond to losing a lot of big names. The columnists also talk with Dennis Dodd, CBSSports.com national college football writer, to talk about Championship Weekend and the College Football Playoff.

Volleyball team not looking for another silver

The Texas volleyball team has made the Final Four five years in a row. It hasn’t won the NCAA title since 2012, however. In 2016, Texas fell to Stanford in the final. In 2015, Texas lost to Nebraska in the championship. The Longhorns will look to make their sixth straight Final Four, starting with a match against Fairfield on Friday, but this time the seniors know they won’t have a ‘next year.’

Nine future Longhorns are still alive in the Texas high school playoff regional semifinals. Just two of the in-state commits didn’t make the playoffs this season. One out-of-state player is still alive in his state playoffs, Rondale Moore of Trinity in Kentucky. Recruiting writer Mike Craven has you covered if you want to track all of these high school stars committed to playing for Texas.