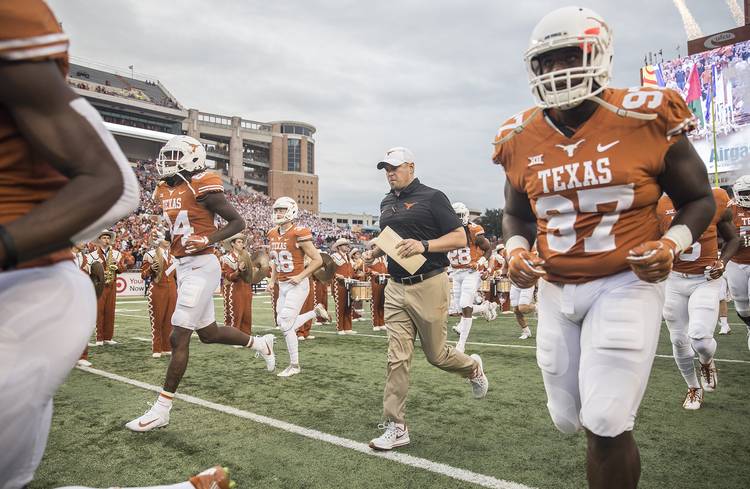 Never before has Texas employed a football coach who quoted Greek conquerors. There’s no question that Tom Herman was different.

“There’s a quote by I believe it’s Alexander the Great where it says, ‘The actions of each of us determine the fate of all of us,’” Herman said in August.

Alexander III of Macedon, known for his military mind and diplomatic skills, had no problem getting through the Hellespont. Going through the Coliseum, the Cotton Bowl and Amon G. Carter Stadium would’ve been far tougher.

Herman truly believed the Longhorns were poised for greatness, but instead the program is stuck at 6-6. Texas will learn its bowl destination Sunday afternoon. It’s most likely the Texas Bowl, but anything is possible based on how the College Football Playoff committee decides.

Every individual action over the last three months has indeed determined UT’s fate. The program can win its bowl game and finish with a winning record. Or, one more loss in December will seal this program’s fourth-straight losing season.

With that in mind, here’s a look at 12 moments that shaped how the Horns landed at .500:

When Herman arrived with vim and vigor from Houston, he refused to watch game film from the Longhorns’ 5-7 campaign that got previous coach Charlie Strong fired. Not even the disastrous overtime loss to Kansas, the pivotal moment that sealed Strong’s fate. “What good would that do me?,” he asked.

Herman didn’t want to see who thrived or wilted under pressure? He wasn’t concerned how former offensive coordinator Sterlin Gilbert used quarterback Shane Buechele? He would have known the pros and cons of a short-yardage package like the 18-Wheeler. And, he would have seen a defense that ranked among the worst units in school history.

After dismissing all that untapped data, Herman felt he was ready for the 2017 season. “I know how they’ve been trained,” he said.

2. A complete breakdown vs. Maryland

Maybe the Horns were trying to impress a new coaching staff, maybe they were just oblivious to the dangers of a low-level Big Ten opponent. Whatever the reason, Texas looked totally unprepared in a 51-41 season-opening loss to Maryland.

All the same problems that Strong had were now Herman’s problems. It dumped cold water on a fan base that truly thought it was a new day. The Terps gashed the Horns on the ground and even blocked a field goal, taking it 71 yards the other way for a touchdown.

“I don’t know what kind of game that was, honestly,” linebacker Malik Jefferson said. “But it definitely woke up a lot of people’s eyes if they were sleeping.”

3. A defensive resurgence vs. USC

The singular moment the season turned around was a terrific goal-line stand in the fourth quarter against USC. Naashon Hughes, Gary Johnson and Malcolm Roach blew up Ronald Jones II on fourth-and-goal at the 1, and the Horns were alive.

The Trojans had a season-low 71 rushing yards. The defense allowed Jones to score on a ridiculous 56-yard touchdown pass just before halftime. But the unit played outstanding winning football, a signal defensive coordinator Todd Orlando had struck a chord.

Ehlinger started against the Trojans because Buechele had suffered a shoulder injury against Maryland. The freshman from Westlake held his own and threw a sizzling 17-yard touchdown pass to Armanti Foreman, giving the Horns a 17-14 lead with 45 seconds left in regulation.

What happened after that showed how Ehlinger could be equally thrilling and frustrating — like any freshman.

Ehlinger found fellow freshman Cade Brewer for a 3-yard touchdown pass in the first overtime. In double OT, Ehlinger ran for 8 yards on UT’s “quarterback power” run game to the USC 3. On the next play, Ehlinger lunged ahead but had the ball stripped away just short of the goal line.

It was just the first of several game-changing moments by Ehlinger to come.

A Thursday-night win over Iowa State was the first sign this offense, which by then had lost two starting tackles and a tight end to injury, may not be all that potent. Buechele returned to the lineup and threw for 171 yards, but nobody really shined. Lil’Jordan Humphrey had a team-high 36 receiving yards.

“Are we using our personnel correctly?,” Herman said after a 17-7 win. “Are we putting our players in the best possible position to do what they can do and do it well?”

One of the most controversial decisions of the entire season was Herman’s call to send Ehlinger back into the Oklahoma game after an aggressive, sliding tackle in the Cotton Bowl. “My head hit the ground pretty hard,” Ehlinger said. “And they were just taking precaution. I told them immediately I could go back in. I felt fine.”

Herman said the training staff gave Ehlinger the green light after the quarterback spent just a few minutes being examined. Opposing fans were all over social media blasting Herman for putting Ehlinger back into the game, especially when he haphazardly threw the ball away on fourth-and-13.

In all reality, the game was lost when OU’s Mark Andrews slipped through UT’s secondary for a 59-yard touchdown catch with 6:53 remaining.

Ehlinger’s status was back in the spotlight the following week after a 13-10 overtime loss to Oklahoma State. Ehlinger rolled to his left and threw the ball up for grabs into the end zone. OSU’s Ramon Richards had an easy interception to clinch the win for the Cowboys.

If Ehlinger throws a touchdown, Texas gets the signature win Herman needed. If he throws the ball away, the Horns kick a short field goal and go into double OT. Ehlinger did the one thing he couldn’t — throw an interception. It came out afterward that Ehlinger had suffered another hard blow to the head just a few plays prior and had concussion-like symptoms after the game.

8. Defense up vs. Baylor, breaks vs. TCU

Texas needed a big day defensively against under-manned Baylor, and the Horns delivered. DeShon Elliott returned an interception for a touchdown, and Jefferson had eight tackles in a 38-7 win.

The following week against TCU, the unit simply ran out of gas. Kyle Hicks scored from 1 and 14 yards out and Jonathan Song hit two field goals for the Frogs in a 24-7 loss.

Offensively, it was a dreary night in Fort Worth. The Texas offense had just nine rushing yards. Buechele, who started as Ehlinger didn’t even dress, threw for 254 yards. The Horns final 10 possessions ended with a punt or turnover on downs. The criticism on offensive coordinator Tim Beck only grows.

At least the Horns got some psychological relief with a 42-27 win over Kansas. No more did they have to hear about what happened on that cold night in Lawrence, Kan., in 2016. Seniors played a key role in the victory, but otherwise, it was nothing more than one for the win column.

Two of the biggest defensive plays of the season came at West Virginia. On first-and-goal, Elliott came crashing through and prevented Justin Crawford from scoring. Two plays later, Brandon Jones smashed quarterback Will Grier, who was reaching for the pylon. Grier suffered a broken finger and was lost for the game.

That changed the entire day for the Mountaineers. Playing with their backup, they couldn’t get much going against the Texas defense. Ehlinger threw two touchdowns passes, and Malcolm Roach and Gary Johnson combined for a key turnover late as Texas clinched its sixth win. There was clear relief.

Texas offensive coaches have to wonder how their season would look had one or both quarterbacks remained healthy all season. Buechele suffered shoulder and ankle injuries. Ehlinger’s concussion was an issue throughout October.

Injuries aside, Texas coaches can’t say for sure who the quarterback of the future is. Buechele could transfer, and two highly-touted recruits are expected to sign on Dec. 20.

Texas was two yards away from wrapping up a 7-5 regular season against Texas Tech. Two yards from the Tech 37, actually. Instead of running twice to end three straight losing seasons, Herman chose to let Ehlinger pass. He threw across his body, and Justus Parker took an interception 55 yards the other way.

Tech scored with 1:47 left, and Ehlinger threw another interception in desperation. Instead of clinching a winning record, the Horns are now 6-6 going to a bowl game. They could lose that and still finish 6-7 — the same record Strong had in his first season in 2014.

Herman started the year by saying “our starting 22 could play with anybody in the country.” He finished it befuddled by the team’s inconsistency. “I don’t know. I don’t know. They’re kids. We’ve got to figure that out, obviously. But I don’t have a good answer for you.”