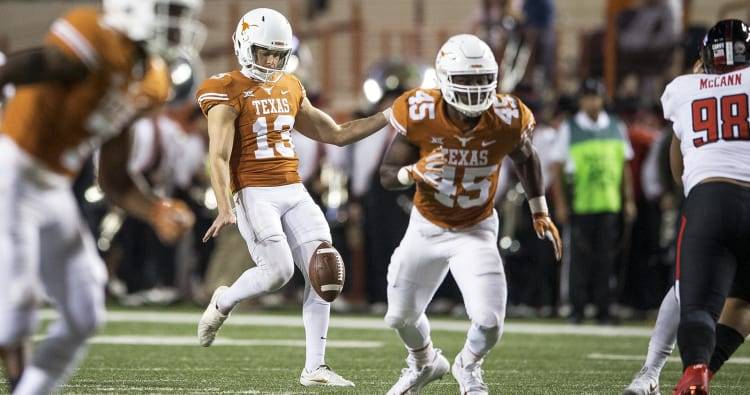 Texas Longhorns punter Michael Dickson has consistently put forth the kind of efforts worth writing home about.

Following what may have been Dickson’s final regular season game as a Longhorn, a 27-23 loss to Texas Tech, Red Raiders coach Kliff Kingsbury did just that, penning a congratulatory letter to the Australian native to compliment another praiseworthy performance.

Received a letter from @TTUKingsbury congratulating me on a game well played. Thank you for the kind words. Class act. pic.twitter.com/SvvhKqqfS5

Just as he has throughout his entire tenure at Texas, Dickson proved to be a true field-flipping threat against Texas Tech. Dickson booted the ball away 9 times for 458 yards for an average of 50.8 yards per punt. Three of Dickson’s punts traveled at least 60 yards and seven were downed at or inside Texas Tech’s 20-yard line.

Not surprisingly, Dickson was honored as the Big 12 Special Teams Player of the Year days later, marking his second in as many years after becoming the first Longhorns to earn the honor last season.

Furthermore, Dickson is largely considered the frontrunner for the Ray Guy Award after sending 73 punts a total of 7,532 yards this season for an average of 48.4 yards per punt.

With such an elite leg, Dickson is weighing his options and the possibility of playing for a paycheck on Sundays going forward. If Saturday night did prove to be Dickson’s final regular season outing in Austin, he certainly did enough to earn the respect of not only his peers, but his opponents, as well.

Headed to Houston: Texas-Missouri will meet in the Texas Bowl on Dec. 27