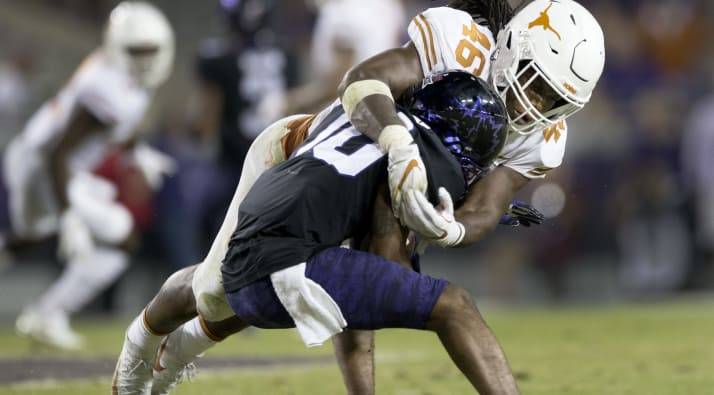 As Texas continues preparing for its showdown with Missouri in the Texas Bowl, junior linebacker Malik Jefferson won’t be practicing with the Longhorns. This absence, though, won’t be for the reason that UT fans might be anticipating.

Texas announced on Sunday night that Jefferson hasn’t yet gone through a postseason practice and will sit out through the beginning of this week. Per a Texas spokesperson, Jefferson was “fighting through minor turf toe the last few weeks of the season.” UT coach Tom Herman is using the first part of this week to rest players who are dealing with minor injuries.

Jefferson’s missed practices, however, will come at a time of uncertainty. Jefferson has not yet announced whether he’ll declare for the NFL Draft or return to Texas for his senior season. Texas juniors Connor Williams and DeShon Elliott have already declared for the draft, and both players will get a head start on their professional careers by skipping UT’s bowl game.

On a conference call for the Texas Bowl on Sunday, Herman didn’t provide any answers about Jefferson’s future. Herman replied that “All of those options are on the table” when asked if Jefferson would play against Missouri.

Bleacher Report’s Matt Miller has projected that Jefferson will be a first-round pick in the 2018 NFL Draft. The 6-3, 240-pound Jefferson leads Texas with his 110 tackles. He was recently named the Big 12’s co-defensive player of the year.