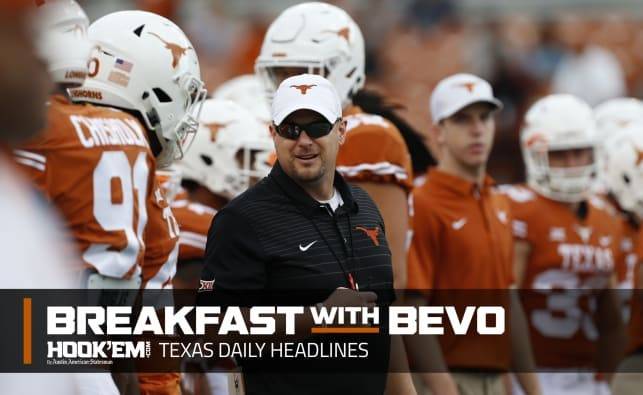 Longhorns headed to the Texas Bowl

As expected on Sunday, Texas was invited to play in the Texas Bowl in Houston, earning its first bowl bid since 2014. The Longhorns (6-6) will play former Big 12 foe Missouri (7-5) in the Dec. 27 game. The Longhorns lead the all-time series against the Tigers 17-6.

After starting the season 1-5, the Tigers rattled off six wins to close out the season. The Austin American-Statesman’s Brian Davis argues that Missouri’s quarterback Drew Lock is arguably the hottest passer in the SEC at the moment. He finished the regular season with an FBS-leading 43 touchdowns, two more than Oklahoma’s Baker Mayfield.

The Austin American-Statesman takes a look at the 12 moments that shaped the Longhorns’ regular season and how the team ended up with a .500 record. The program can win its bowl game and finish with a winning record. Or, one more loss in December will seal this program’s fourth-straight losing season.

No. 2 Longhorns cruise to road victory in Georgia

Ariel Atkins had 17 points and 9 rebounds and Jatarie White added 13 points as Texas cruised to an 81-53 victory over Georgia on Sunday. Texas’ defense kept the Lady Bulldogs from getting to the rim and from generating any momentum beyond the arc. And the Longhorns had nearly everything working offensively in their half-court sets and fast-break chances.

Texas swept aside North Carolina State in the second round of the NCAA volleyball tournament on Saturday and advanced to the Sweet 16 for the 12th consecutive time. Micaya White’s 13 kills led all players, and Texas also got 8 kills from freshman Lexi Sun. The Longhorns will face Utah in the next round Friday at 9 p.m. ET in the Stanford Regional.