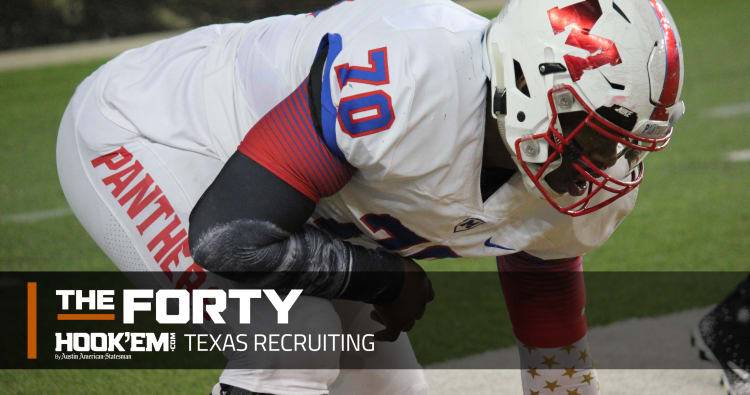 Round Rock Cedar Ridge pulled an upset Saturday night against Coppell to advance to the state quarterfinals for the first time in school history. Jaylen Ellis, a 3-star prospect in the 2019 class who’s committed to Baylor, led the offensive charge with two receiving touchdowns. At 6-foot and 180 pounds, Ellis is quickly improving his stock on the recruiting trail.

The junior committed to Baylor on June 15. He’s the No. 57-ranked wide receiver in the county and the No. 55-ranked overall prospect in Texas, per the 247Sports composite. Ellis will likely find himself on the 2019 Fabulous 55 when it’s released after national signing day in February.

“It was exciting, but I had to keep my composure the whole time,” said Ellis about playing at McLane Stadium in Waco, his future collegiate home. “Baylor has a family-oriented coaching staff and they treated me like a son and I loved it.”

Ellis is a junior, which means more offers are sure to come his way before he can sign with Baylor in December 2018. Texas might be one of those schools to offer. Ellis visited Texas a couple of times during the season and admits a UT offer would be hard to ignore.

“Texas is a top school. They are close to home. I was born and raised in Austin, so if I pulled an offer from Texas that would be very special,” he said. “The tradition of Texas is hard to ignore.”

Ellis is in contact with Texas receivers coach Drew Mehringer and the two are building a relationship.

“He’s really honest and tells you how it is at all times,” Ellis said. “I like that.”

Texas is expected to ink the best safety class in the nation when the 2018 recruiting cycle ends. The Longhorns hold commitments from elite prospects B.J. Foster, Caden Sterns and DeMarvion Overshown. The focus for the staff at the position unit is now transitioning toward the 2019 class.

One name to remember is Jonathan McGill, a 3-star prospect from Coppell. The 5-9, 170-pound safety prospect is a jack-of-all-trades high school player. During the playoff loss to Cedar Ridge on Saturday in Waco, McGill played on offense, defense and special teams.

“It’s fun contributing all over the field. I never want to come off the field so it works for me,” he said after the loss. “Defense is my preferred side of the ball, but it is fun to touch the ball on offense and special teams and help the team create points.

“I’d still prefer a pick-six over a touchdown reception, though.”

McGill ranks as the 29th best safety in the country and the 51st ranked prospect in Texas. The future Fabulous 55 member holds five offers, including one from Stanford. Texas and Baylor also are in contact and have hinted at offers.

“Stanford is really sticking out to me because of the education and the football success,” McGill said. “Recruiting has been going pretty slow for me, but it is starting to pick up. In the spring, I think my stock should rise and I hope Texas is one of the schools to give me an offer.”

Texas needs offensive linemen. The Longhorns hoped to add Waco Midway prospect Kaitori Leveston before signing day. The Kansas State commit was offered by Tom Herman and the staff on Nov. 20.  It doesn’t appear to be the case if Leveston was speaking honestly following Midway’s playoff-victory over Mansfield last Friday in Waco.

“I thoroughly thought it through when Texas extended me an offer because it is a great program and it is close to home,” Leveston said. “I decided to stick with Kansas State because when I went to Manhattan on my visit it felt like home. I told the Texas coaches I’ll be staying with Kansas State.”

Two offensive linemen — Reese Moorea and Rafiti Ghirmai — are currently committed to the Longhorns. Texas would like to add two more, including a JUCO prospect, before the end of the 2018 cycle. Graduate transfers also would be an option.