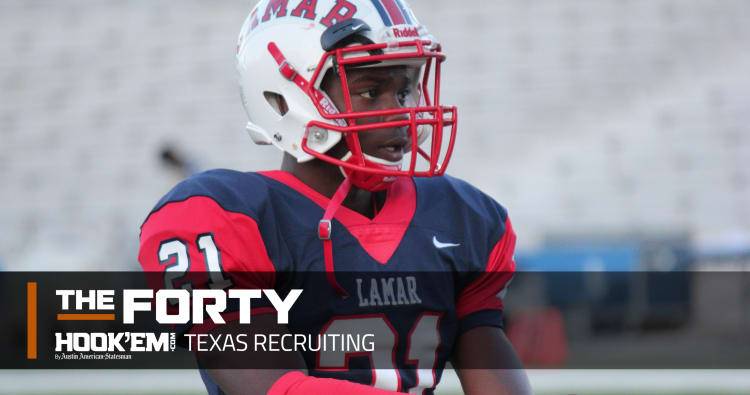 Will all current commitments sign or will some wait until the normal February period to weigh options until the last minute and possibly take more official visits?

What does is mean if a prospect doesn’t sign with a school but remains committed?

And how will the coaching changes around the country change the landscape over these next two weeks?

Regardless, Texas has holes to fill before closing the book on a successful recruiting cycle. The Longhorns hold 18 commitments and the class ranks second in the nation and first in the Big 12. Not too bad for a 6-6 program hoping to end a three-year streak of losing records.

The 5-star cornerback remains the biggest target remaining in the state for 2018. The Longhorns are firmly in the mix for his signature, along with LSU and Ohio State. Cook has two Houston Lamar teammates — D’Shawn Jamison and Al’vonte Woodard — committed to the Longhorns and that should help Tom Herman and his staff land Cook.

The Longhorns have yet to gain a commitment from a 2018 defensive end. One of the top targets throughout the entire cycle was Ossai, who was leaning toward Texas A&M before the firing of Kevin Sumlin. Texas is back in his recruitment now and the Longhorns hope an in-home visit from the staff can pry Ossai away from Jimbo Fisher.

Honored to play in the OvsD bowl this year!! pic.twitter.com/MeN0Nby8NH

Hines was originally recruited as an offensive guard. Texas eventually offered him as a defensive tackle and LSU followed suit to keep his commitment. Hines has stated publicly that he’ll remain committed to the Tigers, but that doesn’t mean the Longhorns won’t keep trying to add him to current defensive tackle commit Keondre Coburn.

Texas needs immediate help along the offensive line and that means Herman and his staff must loot the JUCO ranks for big men ready to compete for starting snaps in year one on campus. Most prep linemen simply aren’t ready to make the transition from blocking kids in high school to grown men in college. Grandy recently picked up a UCLA offer, so the challenge for Texas will be getting Grandy out of California.

Texas is familiar with recruiting Arizona Western College, the home of former Texas tight end commit Dominick Wood-Anderson. The Longhorns made a stop by Arizona Western last week and extended an offer to Johnson, a 3-star offensive tackle who could immediately compete for Connor Williams’ vacated left tackle spot. Texas should have a great shot of landing Johnson if he gets to Austin for an official visit.

Ford’s top two schools heading into his senior season were Alabama and Auburn. Georgia moved into the driver’s seat as the season progressed and the Bulldogs will be tough to beat for Ford, a 4-star tight end who hosted Texas assistant coach Corby Meekins for an in-home visit on Monday night. Texas needs tight ends and Ford is the best available player at the position in the 2018 class.

This one is a long shot, but Marshall has continued to include Texas when discussing his favorite programs. The 5-star wide receiver has also taken visits to Austin. LSU rarely loses elite prospects from Louisiana to programs outside of the state and Marshall is likely going to end up at LSU. He’s too good of a player not to continue recruiting, however, and the Longhorns have done a nice job staying in the mix.

Clark, much like Marshall, will be tough to lure away from Louisiana. No program does a better job of staking a claim to its state prospects like LSU in recruiting. That said, Clark did take an official visit to Texas after Thanksgiving weekend and came away impressed with the program. He also likes the depth chart, especially if Malik Jefferson decides to leave for the NFL. Clark is committed to LSU.

White, a Texas A&M commit, was flirting with a flip before the departure of Kevin Sumlin. It remains to be seen if the hire of Jimbo Fisher by the Aggies gives White more or less of a reason to de-commit from Texas A&M. The Longhorns want to add more linebackers to the class and White is a player who could play multiple positions for defensive coordinator Todd Orlando.

Richmond is ready for Shaka Smart homecoming, but is Texas?