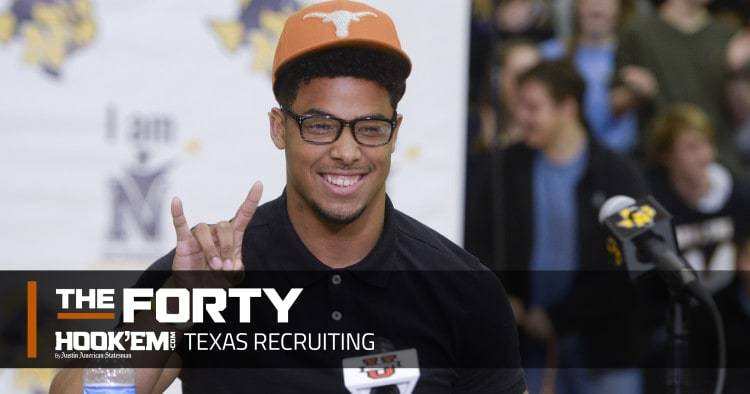 The overview of the early signing period

Recruiting is always evolving and the NCAA added a new wrinkle for the 2018 class. Unlike in past years, all 2018 prospects are permitted to sign binding national letters of intent beginning on Dec. 20. The period lasts until Dec. 22.

The positives: An early Christmas for schools

The new early signing period most benefits the schools. It allows college programs to ink players before the new year, allowing staffs to focus on keeping a handful of 2018 targets committed until February instead of a full class.

“I like the early signing period because it helps colleges get players locked up without the worry of a player flipping late,” said Stephon Dixon, the head coach at Houston Heights High School. “It also helps players get offers from schools earlier because a player can be signed in December and off the board if a school waits too long to offer.”

Texas holds 18 commitments. In an ideal world, the Longhorns would sign all 18 on Dec. 20th and move on to filling the remaining needs of the class. It also could allow the staff to switch focus to the 2019 class. This isn’t an ideal world and it remains unclear whether the Longhorns will get a faxed letter of intent from all 18 recruits on Dec. 20.

“I believe the early signing period really benefits the schools more than the players, especially in Byron’s case since he isn’t enrolling early,” said Paul Vaughns, the father of Texas linebacker commit Byron Hobbs. “This new period allows the schools to see who is really committed so they can secure their recruiting class instead of waiting until the last minute.”

Most of the Texas commits I’ve spoken to plan to sign during the early period. Texas target Antony Cook will announce on Dec. 20. This early period may become the biggest day in recruiting. It may be a dud. The 2018 class gets to dictate that and there is still some confusion on if the plan is to sign on the 20th or any time during the three-day window.

“I know I’ll be signing in December,” said offensive line commit Reese Moore. “I can’t say I’ve talked too much with the coaches about what day.”

If a player doesn’t sign in the December window, it doesn’t necessarily mean bad news for a school. The Texas high school state football championships will overlap with some of the possible early signings. Texas commits like Keaontay Ingram, BJ Foster, Cameron Dicker and Caden Sterns could be in a game week and decide to put off the fax until February.

The negatives: Challenges for smaller schools

The potential negatives surrounding the new early signing window don’t impact a program like Texas like it will smaller programs. In most cases, prospects committed to the blue-blood programs around the country aren’t waiting for better options to roll around come January. That isn’t true for players committed to Group of 5 programs or even smaller Power 5 programs.

If you’re committed to Texas State or UTSA or Houston, do you go ahead and sign in December or do you wait to see if a Big 12 school needs a player at your position when the dusts settles after the early signing period?

“We’re learning a lot about where we stand with our commitments during the early signing period,” said one Conference USA assistant coach. “Are we the school they’re ready to play for or do they want another month or two to sort out options? We’ll all learn that together in December.”

Coaching changes also are an issue, especially for the recruits and their parents.

“We’ll have to see how that scenario plays out,” Vaughns said. “That is the flipside to signing early.”

The carousel of coaching changes began and ended, for the most part, before the early signing period began. It still isn’t enough time to appropriately evaluate an inherited class and properly vet possible additions before ink can hit paper.

Recruiting takes time. It’s like dating. Signing a letter of intent is the equivalent to a marriage between a prospect and a program. That player is committed for at least a year, and then if he wants to transfer, it costs that player another year. Oddly enough, those same rules don’t apply to the adults being paid millions of dollars.

Scott Frost won’t sit out a year before coaching a snap at Nebraska. Neither will Jimbo Fisher at Texas A&M. The players are the ones in a binding contract and it might cause commits at the schools with new coaches to put off signing their letter of intent until February.

“It’ll depend on how these next few weeks go (for the new staff),” said one source who covers Texas A&M when asked how many commitments will sign in December. “It’s an unknown right now.”

The post A look at the potential positives and negatives of early signing period appeared first on Hook ‘Em.