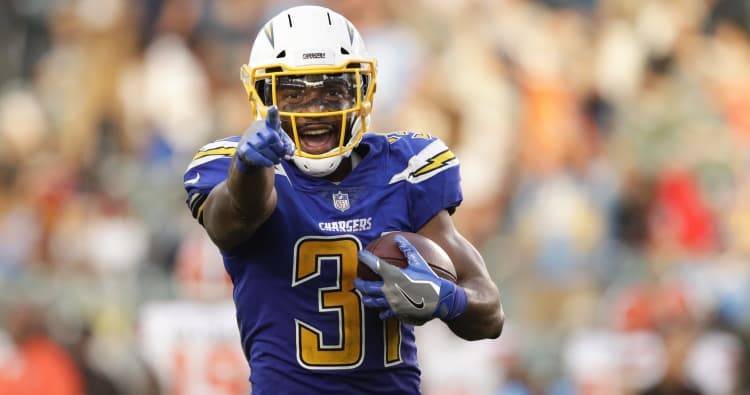 Adrian Phillips had just two tackles, but he also made the game-clinching interception to help the Chargers defeat the Browns 19-10. It was Phillips’ second interception of the season. The third-year safety has 49 tackles on the season and is helping the Chargers make a push for the playoffs. They’ve won three in a row and six of their last eight after starting the season 0-4.

Marquise Goodwin is really coming on this year and things are suddenly looking pretty good for the 49ers in the long run. In Week 12 he had four catches for 78 yards, but this week Goodwin caught a season-high eight catches for 99 yards. New starter Jimmy Garoppolo led the 49ers to their second win of the year, a 15-14 win over the Bears. So far this season Goodwin’s surpassed his career highs in receptions (35), yards (677) and first-down catches (29). He’s also been targeted a career-high 70 times and things are looking up with Garoppolo at the helm.

Derrick Johnson made nine tackles and had a tackle for loss, but the Chiefs lost their sixth game in seven tries. Despite Johnson’s strong performance, the Chiefs fell to the Jets 38-31. At 6-6, Johnson knows the Chiefs have a lot of work to do to qualify for the playoffs.

Malcom Brown, DT, Patriots—Brown made seven tackles and had half a sack as the Patriots dominated the Bills 23-3.

Brian Orakpo, LB, Titans—Orakpo had a sack and made three tackles in the 24-13 win over the Texans. For the third straight year he has at least five sacks.

Trey Hopkins, OG, Bengals—Hopkins and the Bengals nearly had a win in the bag but eventually fell 23-20 to the Steelers. The Bengals rushed for 130 yards, but he offensive line gave up two sacks.

Earl Thomas, S, Seahawks—Thomas made five tackles in the 24-10 win over a strong Eagles team.

Kenny Vaccaro, S, Saints—In his second game back from injury Vaccaro recorded a sack and made three tackles in the 31-21 win over the Panthers.

Jamaal Charles, RB, Broncos—Charles rushed three times for 12 yards and made five catches for 39 yards. The Broncos are struggling mightily and fell 35-9 to the Dolphins on Sunday.

Quandre Diggs, CB, Lions—Diggs made five tackles and defended a pass as the Lions had a rough time against the Ravens. They fell 44-20 as they allowed 24 points in the final quarter. He cheered up when he caught some of the Texas basketball game on Tuesday night.

Lamarr Houston, LB, Bears—Houston hit the ground running after being released by the Texans last Tuesday. He rejoined the Bears and made a sack and had three tackles in the Bears’ loss to the 49ers.

Fozzy Whittaker, RB, Panthers—Whittaker returned two kickoffs for 42 yards in the Panthers’ loss to the Saints.

Justin Tucker, K, Ravens—Tucker was perfect on the day, making three field goals and five extra points in the big win over the Lions. He had a long field goal of 51 yards.

Phil Dawson, K, Cardinals—Dawson had a rough day a week after making a game-winner for the Cardinals. He went 1-of-2 on both field goals and extra points in the 32-16 loss to the Rams.

Brian Robison, DE, Vikings—Robison and the Vikings won their eighth in a row. He had one tackle in the 14-9 win over the Falcons.

Sam Acho, LB, Bears—Acho failed to record a tackle, but he hit the quarterback once in the loss to the 49ers.

Geoff Swaim, TE, Cowboys—Swaim didn’t log a stat in the Cowboys’ win as he played in just 10 offensive snaps.

Malcolm Brown, RB, Rams—Brown sprained his MCL in Week 9 and has missed the last four games for the Rams.

Marcus Johnson, WR, Eagles—Johnson was inactive for the 24-10 loss to the Seahawks.

Hassan Ridgeway, DT, Colts—Ridgeway missed his second game due to a shoulder injury. The Colts lost 30-10 to the Jaguars.

Colt McCoy, QB, Redskins—McCoy, didn’t make an appearance in the loss to the Cowboys.

The post Longhorns in the NFL: Week 13 features strong defense and an emerging receiver appeared first on Hook ‘Em.