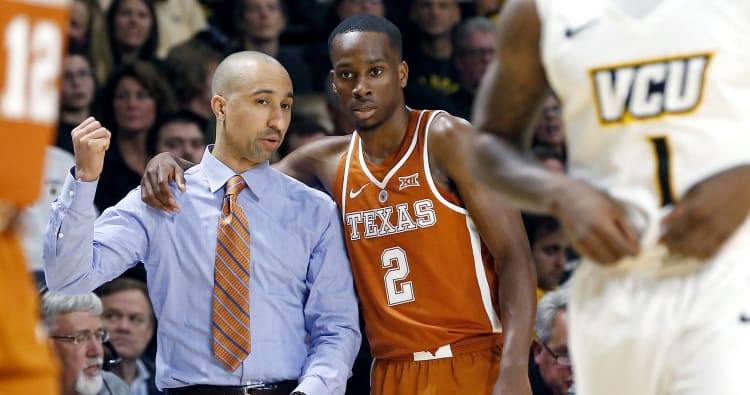 RICHMOND, Va. — Texas got 75 tickets in its allotment inside the sold-out Siegel Center on Tuesday against Virginia Commonwealth. Freshman Matt Coleman needed at least half that.

“I needed 25 tickets, plus the people who I know who already attended school,” the Virginia native said. “Close to 40.”

Texas coach Shaka Smart, who coached at VCU for six seasons, enjoyed the return to Richmond. Coleman’s hometown of Norfolk was about 90 miles away, so this was a homecoming for him, too.

Coleman hugged family members and friends in the stands after UT’s exhausting 71-67 win. He scored only two points and had just four assists. When the emotion fades and the film starts rolling, Coleman and the coaches may see plenty of room for improvement.

“C-minus,” Smart said when asked to assess Coleman’s performance. “It’s tough to go home and play. I’m probably harder on him than anyone on the team, but that’s how it needs to be. He’s going to need to be better at a lot of things.

“But the one thing about Matt I do really appreciate, no matter what play happens, he’s on to the next play and focused on helping his team win.”

As UT’s point guard, Coleman continues to value the basketball — no small feat given how much he handles it. He now has 32 assists this season and only six turnovers while averaging 30.5 minutes per game. His lone turnover against VCU was an accident; the ball bounced off a shoe and rolled out of bounds.

As UT’s 19-point lead was whittled down, Dylan Osetkowski said “guys were coming together with tight huddles and taking to one another. Matt was doing a great job leading guys out there.”

Coleman said the outrageous atmosphere will only help the Horns in future games. “Part of it, we’ve got a lot of young guys,” Coleman said. “It just staying poised when teams go on runs. As time goes on, we’ll get better.”

Free throw woes: Texas has now shot better than 50 percent overall for three consecutive halves, stretching back to the Nov. 29 win over Florida A&M. That’s not what occupies Smart’s thoughts, though.

“To be honest, free throws are as big as anything,” Smart said. “When VCU was making their run, It think we missed five out of six. One, it’s points that you’re not taking advantage of. And then number two, momentum wise, when you miss a couple free throws, it gives the other team a lot of momentum.”

Texas was 12 for 22 from the stripe against VCU. For the season, the Horns are shooting 61.1 percent at the line, the lowest total in the Big 12.

Jones’ wrist injury: Andrew Jones scored a career-high 19 points and hit four 3-pointers. But he missed the final 1:59 after falling and injuring his right wrist.

“He came down on his wrist twice,” Smart said. “He’s got ice on it right now. We’ll have to evaluate it, but I thought Andrew was huge to start the game.”

Wrist injuries can nag shooters for days on end. Texas does not play again until next Tuesday  at home against Michigan.

Up, up and away: Mo Bamba’s towering first-half dunk was all over social media late Tuesday and early Wednesday. “He should have never jumped,” Bamba said after the game. “Ha! Nah, just playin’.”

Said Osetkowski, “That was high level. That goes to show how freak of a person he is, to be honest.”

The dunk was impressive. But so were the two blocks on Justin Tillman’s shots in the low post. Bamba sent another VCU shot into the stands with such easy, it almost didn’t warrant mention. Bamba also had 13 points and 13 rebounds.

Longhorns in the NFL: Week 13 features strong defense and an emerging receiver