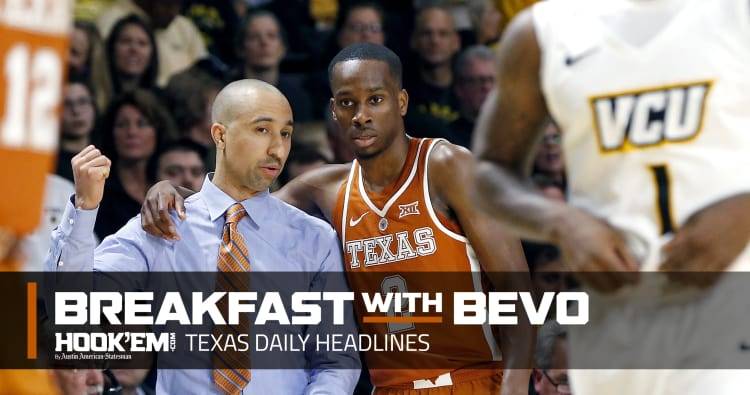 The Texas basketball team survived Tuesday night as it defeated Virginia Commonwealth 71-67 in Shaka Smart’s return to the school he took to the Final Four. Smart utilized the Havoc pressure defense and a home-crowd advantage in the six years he coached at the school. This time around he was the enemy. The home crowd welcomed the coach, but once the game tipped off they made things hard for the visitors. After building a 19-point lead, the Longhorns withstood a scoring drought and missed 10 free throws and the environment to hold on to the win.

Should Malik Jefferson stay another year?

American-Statesman columnist Cedric Golden makes clear his view on whether or not Malik Jefferson should enter the NFL draft. Jefferson has yet to announce his decision, giving Texas fans hope that he may return rather than cash in on a lucrative NFL career.

The first day for athletes to sign national letters of intent is coming up soon and the Longhorns still have some players on their wish list for the 2018 class. The new early signing period approved by the NCAA, allowing players to sign between Dec. 20-22,  poses some questions, writes Mike Craven. It will be interesting to see which players currently committed to schools actually sign on the new earlier day or wait for the traditional first Wednesday in February. Texas has 18 players committed to the Longhorns, leaving a few spots available.

There were a lot of different reasons the Longhorns went 6-6 this season, but you couldn’t point fingers at safety DeShon Elliott or punter Michael Dickson. Dickson and Elliott earned spots on the SB Nation All-America team as a result. Dickson is the Big 12 special teams player of the year and averaged 48.4 yards per punt. Elliott made SB Nation’s second team after making 6 interceptions and amassing 63 tackles. SB Nation also named LB Malik Jefferson and defensive tackle Poona Ford as honorable mentions.

Texas middle blocker Chiaka Ogbogu already earned Big 12 player of the year honors, and added to her trophy case on Tuesday. The newly-named Southwest Region player of the year averaged 2.55 kills and 1.7 blocks per set this season. Alongside Ogbogu, Cat McCoy, Ebony Nwanebu, Ashley Shook, Lexi Sun and Micaya White all made the team.