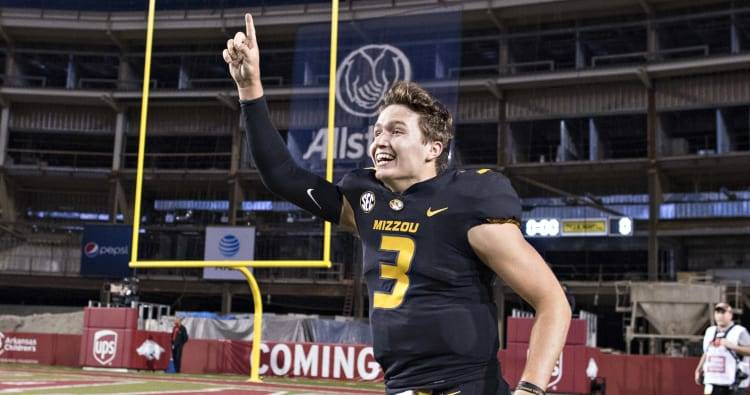 With most of the SEC East imploding around it, Missouri blew through the back half of its schedule to set up an intriguing Texas Bowl between former Big 12 adversaries.

Since the Tigers were 1-5 at the time their run began, most of it happened in virtual obscurity. Here’s a brief recap of how quarterback Drew Lock put himself on NFL draft boards and how Barry Odom jumped off the coaching hot seat.

Following his team’s third-straight loss, a 51-14 drubbing to then No. 15-ranked Auburn, Odom marched into his press conference and delivered an impassioned monologue that quickly picked up steam on social media.

Then his team gave up 1,186 yards in back-to-back losses at Kentucky and Georgia, and the college football world shrugged. The Tigers were 1-5, and calls for Odom to be fired only grew louder. As it turned out, the turnaround was just around the corner.

Lock threw for 467 yards and 6 touchdowns in a 68-21 win over Idaho that stopped the losing skid, and a 52-12 blowout of Connecticut proved the defense had a pulse. Perhaps the Tigers got a stroke of good fortune by facing Florida the week it parted ways with Jim McElwain, but a 45-16 score raised eyebrows.

The following week, Missouri sounded the death knell on Butch Jones’ tenure at Tennessee with a 50-17 rout of the Volunteers. One win away from bowl eligibility, the Tigers did one better with back-to-back road victories over Vanderbilt and Arkansas — including a thrilling 48-45 win over the Razorbacks.

In a stark contrast to Texas, the Tigers’ resurgence came in large part because of consistently outstanding quarterback play. Lock broke the SEC record for touchdown passes with 43, a number that led FBS. He threw for 3,695 yards and is averaging 328.7 yards per game with only 5 interceptions during the winning streak.

Running back Ish Witter also emerged, rushing for at least 100 yards the past three games. He finished as the team’s leading rusher with 992 yards and 5 touchdowns. The Tigers also improved immensely on defense throughout the season, from dysfunctional to giving up only 21.3 points during the winning streak — including the 45 against Arkansas.

At the midway point, many thought Mizzou was the worst team in the SEC. Now, the Tigers are one of eight programs in the conference that don’t have to worry about finding a new coach this offseason. In the East, Missouri proved once again that it is a more stable program than blue-bloods Florida and Tennessee, and climbed out of a brief dark period that began with the retirement of Gary Pinkel and a player strike over racial incidents on campus.

The post How Missouri went from 1-5 to 7-5, setting up a meeting between old Big 12 foes appeared first on Hook ‘Em.

A look at the 12 Heisman winners Texas has faced; will Baker Mayfield be the 13th?