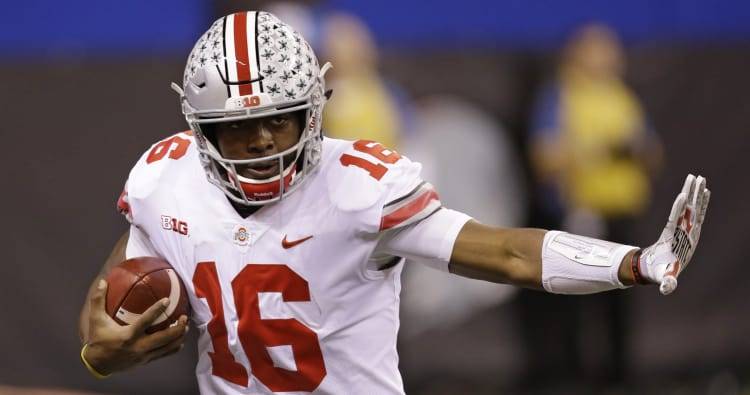 ATLANTA — J.T. Barrett’s time in Columbus is finally winding down, and the quarterback from Wichita Falls who so badly wanted to be a Longhorn will forever be a Ohio State Buckeye.

“I didn’t get an offer from Texas. I wanted to go to Texas, yeah,” Barrett said at the College Football Awards show. Those words will probably forever sting some in Austin.

Barrett, a Davey O’Brien finalist as the nation’s best quarterback, thanked his former position coaches Tom Herman and Tim Beck and now Ryan Day. He firmly believes the Longhorns will be just fine with Herman and Beck orchestrating the offense.

“I think everything’s going to work out for the University of Texas with my man coach Herman down there,” Barrett said in an interview with the American-Statesman. “Just understand the love and care he has for his players. He was one of the main reasons why I went to Ohio Sate.

“That just speaks volumes on how he approaches the game of football and how he takes care of his guys as well.”

Barrett knows how fans think, though. He’s the first Ohio State quarterback to go 4-0 against Michigan. He’s won 37 games as a starter, captured 35 school or Big Ten records and thrown for 9,309 career yards. But heaven help him about those six career losses.

Herman was there in 2014 for one of them against Virginia Tech. Beck was on coach Urban Meyer’s staff in 2015 and 2016 when the Buckeyes went 23-3. For whatever reason, Beck was largely blamed whenever things went haywire.

“I feel like you get a bad wrap,” Barrett said. “When you lose games, who’s the first people they blame? The head coach, the quarterback and the offensive coordinator. With that being said, yeah, they gave coach Beck a hard time.”

As for Beck’s standing as the Texas offensive coordinator, Barrett said, “If they do down there, they shouldn’t have just because of the type of guy he is and understand that he’s doing his absolute best to go out there and win ballgames.”

“I would say just be constantly watching film and understand the offense that coach Herman and coach Beck have in place,” Barrett said. “And then, prepare yourself the best you can to go out there and be successful on Saturdays. Especially as a young guy, it’s kind of difficult to translate what you see in meetings and films to the games. With that, you’ve got to be constantly in the QB room trying to develop and get better.”

Would Barrett have gone 37-6 at Texas? Would he have set all those records and been a key participant in the 2014 national title race with the Longhorns? He’ll never know, and frankly, doesn’t care anymore.

“It just wasn’t in the plan God had set out for me,” Barrett said. “I think growing up being from the state of Texas where I was at, I wanted to go there, but it just wasn’t for me. I’m really glad that everything worked out where I was able to go to Ohio State, play in Columbus, Ohio, be a part of Buckeye Nation, be a Buckeye.

“The bonds and people I’ve met, that’s something that’s definitely going to last a lifetime being a Ohio State Buckeye,” he added. “I would say I’m glad things didn’t work out with me going to Austin.”