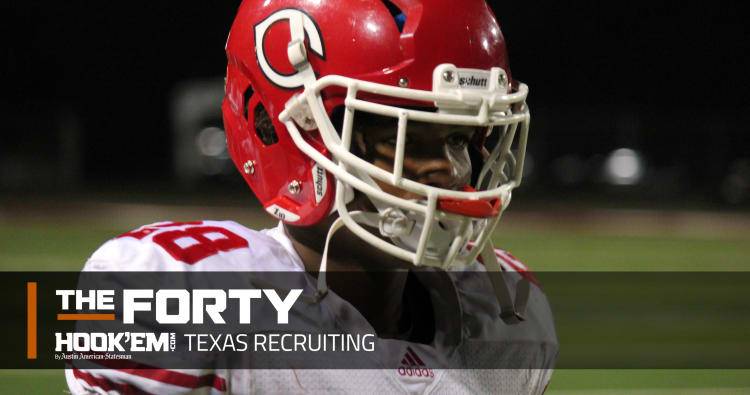 Texas’ 2018 recruiting class ranks second in the nation and first in the Big 12. Of the 14 in-state commits, four remain in the high school football playoffs.

Future Longhorns went 4-5 in the regional semifinals round.

All but two of the 2018 in-state UT commits reached the playoffs. Fort Worth Eastern Hills linebacker Byron Hobbs and Alief Taylor wide receiver Brennan Eagles finished their seasons in Week 11.

That means 12 of Texas’ 14 in-state commitments were in action during the bi-district round of the state playoffs. Out-of-state commits Rondale Moore and Cameron Rising also made the playoffs.

Quarterback Roschon Johnson, Texas’ lone commitment for 2019, made it three rounds deep in the playoffs as a junior.

The Newbury Park season ended last week. In nine games, Rising had 1,374 yards and 12 touchdowns to just four interceptions. He completed 56 percent of his passes. On the ground, he added 431 yards and nine touchdowns.

Moore led his Trinity program to another Class 6A state championship in Kentucky. Entering the game, he had a school-record 99 catches for 1,347 yards and 15 touchdowns. He also added three touchdowns as a rusher, two as a punt returner and one as a passer.

The season ended for Roschon Johnson and Port Neches-Groves over the weekend with a loss to College Station. The Longhorns’ lone 2019 commitment finished his junior season with 65 total touchdowns. The 4-star dual-threat quarterback passed for 2,918 yards and 35 touchdowns, adding 1,627 yards and 29 touchdowns on the ground. His one reception on the season was a 43-yard touchdown.