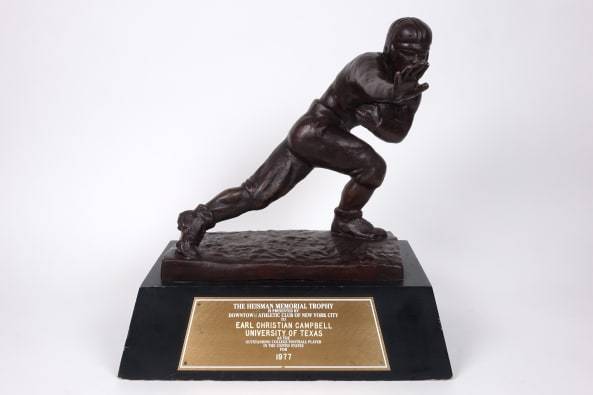 The quarterback factory that is Lake Travis High School has produced six FBS-level arms since 2004 — and a seventh,  current senior Matthew Baldwin — committed to Ohio State on Thursday. But Oklahoma’s Baker Mayfield could secure the school’s first Heisman Trophy on Saturday night.

If Mayfield does win, he’d be only Central Texas’ second winner. Copperas Cove’s Robert Griffin III was the 2011 winner. Mayfield (who finished third in voting last year) and Westlake’s Drew Brees (third in 2000) have logged top-three finishes in the last 20 years.

Austin has stronger Heisman ties through the University of Texas, which has produced two winners in Earl Campbell (1977) and Ricky Williams (1998) and other finalists.

Jimmy Saxton, 1961 (3rd): Saxton rushed for 846 yards and nine touchdowns, and his 7.9 yards per carry still stands as a school record. He received 27 first-place votes but finished third behind Syracuse’s Ernie Davis.

Scott Appleton, 1963 (5th): He won the Outland Trophy but came up short in a bid to become the first offensive lineman to win a Heisman. He got nine first-place votes; Texas went on to beat the Heisman winner — Navy quarterback Roger Staubach — in the Cotton Bowl for the school’s first national championship.

Vince Young, 2005 (2nd): Some fans still insist that Young won a national championship and the Heisman that year — the Texas quarterback was edged out by USC running back Reggie Bush, who later had to forfeit his Heisman. Instead, the Heisman Trust simply doesn’t recognize a 2005 winner.

Colt McCoy, 2009 (3rd): He finished second in the 2008 vote as three Big 12 quarterbacks — Oklahoma’s Sam Bradford (who won it), McCoy and Texas Tech’s Graham Harrell — all finished in the top four; McCoy set school records for passing yards and touchdowns that season. And in 2009 he led Texas to the national championship game but finished behind Alabama’s Mark Ingram and Stanford’s Toby Gerhart.

D’Onta Foreman, 2016 (8th): The Doak Walker Award winner rushed for 2,028 yards, second in school history only to Williams’ 1998 season. But Foreman probably was hamstrung by playing on a 5-7 team.

Texas men are struggling at the line, so Shaka Smart’s helping them focus