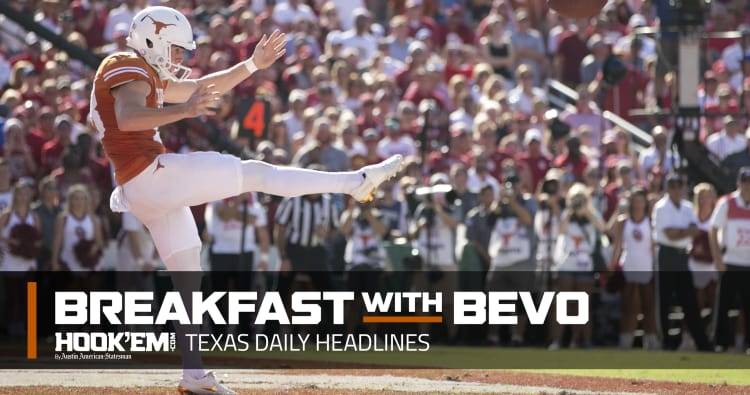 Texas punter Michael Dickson picked up some hardware in Atlanta on Thursday at the College Football Awards show. The junior won the Ray Guy Award after averaging 48.4 yards per punt and recording a 76-yarder this season. He’s the school record holder for yards per punt at 45.5 for his career. Dickson is weighing whether or not he’ll enter the NFL draft, but will play in the Dec. 27 Texas Bowl against Missouri regardless.

Texas safety DeShon Elliott put up a strong performance in 2017 as the Longhorns defense made real strides. Elliott made 6 interceptions and earned a spot as a finalist for the Jim Thorpe Award. Elliott, who has declared for the NFL draft and will skip the Texas Bowl, came up short, however, as Alabama’s Minkah Fitzpatrick took the honor on Thursday night in Atlanta.

Tom Herman gets an endorsement from J.T. Barrett

Quarterback J.T. Barrett, a Davey O’Brien finalist, thinks Tom Herman and the Texas football program will be just fine. Barrett thanked his former position coaches Herman and Texas offensive coordinator Tim Beck for what they did while at Ohio State for his progress at the position. Barrett is no stranger to fans calling out Beck, like they have this season at Texas, and knows the people who are first to blame for losses.

Texas beat writer Danny Davis chronicles the 12 Heisman winners the Longhorns have faced and how they performed against Texas. Baker Mayfield looks likely to become the 13th winner. And we all know how he did against the Longhorns.