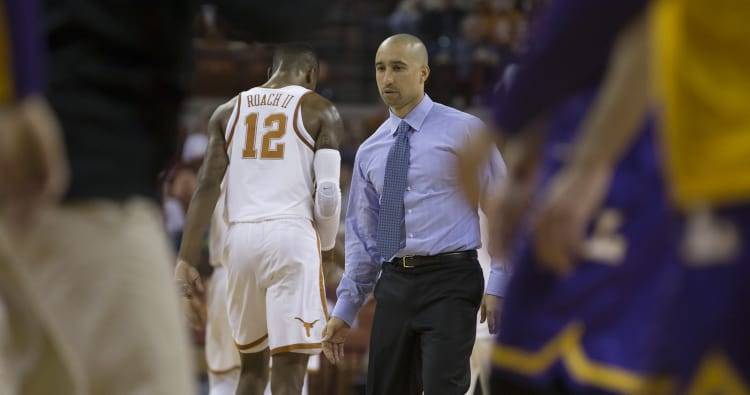 Fear not, Texas basketball fans. You are not alone. Coach Shaka Smart is tired of watching his Longhorns miss free throws, too.

“Momentum-wise,” Smart said afterward, “when you miss a couple of free throws, it gives the (other) team a lot of positive momentum.”

The Longhorns (6-2) have spent the last few days focusing on a key fundamental — shooting free throws. Big 12 games usually boil down to a handful of possessions, and as of right now, Texas is the worst free-throw shooting team in the league at 61 percent. No other team is lower than 71 percent.

Texas’ next opponent, Michigan, isn’t crowing about its free-throw capabilities, either. The Wolverines (7-3) have made just 67 percent of their foul shots this season.

“Coach has been preaching to us — making us run, however you want to say it — that free throws win or lose games,” junior Dylan Osetkowski said Friday. “Yesterday we started off practice with the Gray team against the Orange team shooting free throws, and the losing team has to run.”

The message is being received, apparently. “Guys are wanting to make them,” Osetkowski said.

Free throws played a key role in the VCU win. Rams forward Khris Lane openly admitted they wanted to foul junior Kerwin Roach Jr. because he’s struggling at the line. Roach is shooting 48 percent, having made just 13 of 27. He was 1 of 4 against VCU.

After splitting two foul shots with 40 seconds left, UT coaches switched the personnel and had Roach throwing the ball inbounds. The Rams had to foul Eric Davis Jr., who made 3 of 4 free throws in the final 25 seconds to seal the 71-67 win.

“It’s been on my mind, too,” Roach said. “I’ve just got to step up and knock ’em down. I’m a junior now, so there’s really no excuse not to make free throws. It’s something I’ve been struggling with, but I had to just simply get better at it.”

Osetkowski is the team leader having made 70 percent of his free throws. Typically, teams have multiple players ranging from 70-80 percent. Outside of Jacob Young (4 for 4), the Horns are struggling. Any idea why?

“That’s a great question,” Osetkowski said. “I think guys just have to stay confident going up to the line in big games like that. Just continue to work. Up here in Cooley (Pavilion) or down in the Erwin Center, just step up to the line with confidence.”

The post Texas men are struggling at the line, so Shaka Smart’s helping them focus appeared first on Hook ‘Em.