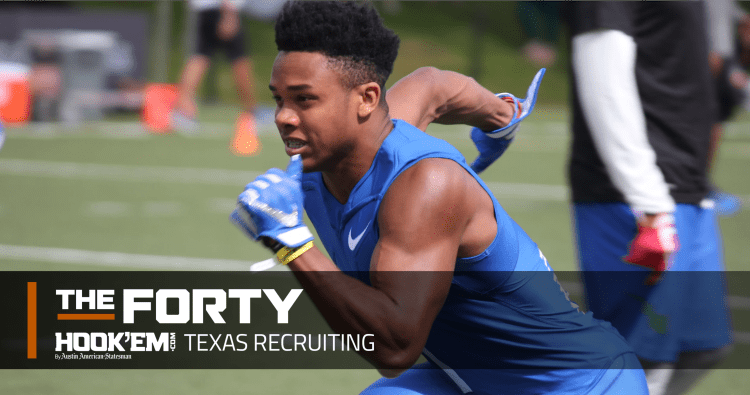 Recruiting doesn’t end when a player gives a verbal commitment to a school. It’s as important, if not more important, to continue to recruit the current commit as hard as chasing new commitments. Texas understands that and a herd of future Longhorns headed to Austin for their official visits this weekend.

Tom Herman and his staff will host most of in-state commitments and 4-star quarterback commit Casey Thompson, who resides in Oklahoma. Four Texas commits – Caden Sterns, Cameron Dicker, BJ Foster and Keaontay Ingram – are still in the state playoffs and are unlikely to attend.

“It’s important to build chemistry as a class and this weekend can be a chance for us to really bond,” Thompson said. “We’re excited about the weekend.”

Nailing down the plans of the 2018 class with the addition of an early signing period beginning Dec. 20 isn’t easy. DeMarvion Overshown, a 4-star safety from Arp, announced on Twitter that he’ll be signing with the Longhorns during the early-signing period, which is from Dec. 20 to Dec. 22.

I will be signing early

Overshown is one of 13 of the Texas commits to confirm an early signature. The current commitments yet to confirm to Hookem.com that they’ll sign in December are Rondale Moore, Keondre Coburn, Malcolm Epps and Rafiti Ghirmai. Cornerback Jalen Green is still deciding whether to sign in December or wait until February.

Texas wide receiver commit Rondale Moore was named the winner of the 25th annual Paul Hornung Award, which is given by the Louisville Quarterback club to the top high school football player in Kentucky. Moore won the MVP of the Kentucky Class 6A state title game when his Trinity squad beat St. Xavier to finish the season 15-0.

Moore set school-records as a senior with 104 receptions for 1,461 yards and 16 touchdowns. He added 505 yards and 7 touchdowns on the ground, and he returned two punts for touchdowns.

Moore, a 5-foot-8.5 slot receiver with elite speed, committed to the Longhorns on June 25 and is ranked as the No. 253 overall player in the country, per 247Sports Composite. Purdue is making a late charge and could be in line to flip the Texas commit, who isn’t planning to sign his national letter of intent until February.

The post Texas set to host most of the 2018 in-state commitments for official visits appeared first on Hook ‘Em.