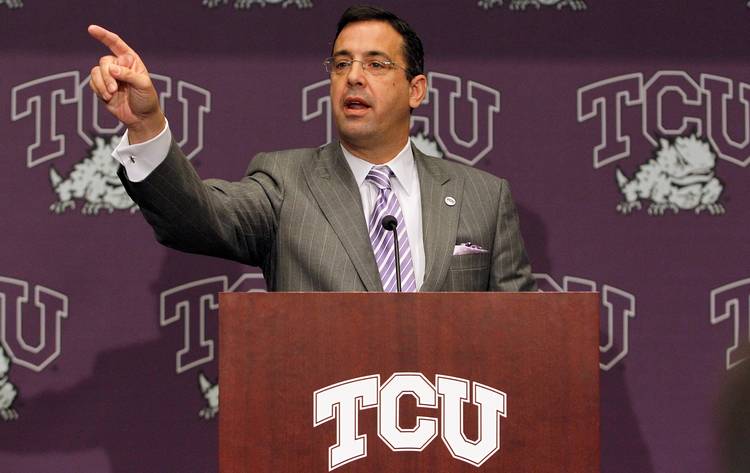 DALLAS - NOVEMBER 29: Texas Christian University Athletics Director Chris Del Conte talks with the media after TCU accepted an invitation for full membership into The Big East Conference on November 29, 2010 in Fort Worth, Texas. TCU will leave the Mountain West Conference for The Big East in July 2012. (Photo by Tom Pennington/Getty Images)

TCU athletic director Chris Del Conte has been hired to assume the same position at the University of Texas where he will assume responsibility for both the men’s and women’s athletic departments.

Texas was expected to make the announcement this afternoon.

Del Conte will replace Mike Perrin, who took over on an interim basis in September 2015 after Steve Patterson was fired by university president Gregory L. Fenves.

Del Conte took over at TCU in 2009 and has raised that athletic program to heights the Horned Frogs have never reached before. The football team won a Rose Bowl over Wisconsin and lost to Oklahoma in the Big 12 championship earlier this month, and the baseball team has reached the College World Series the last three consecutive seasons.

Under his leadership, he oversaw the school’s entrance into the Big 12 in 2012. Under his watch TCU also underwent several athletic upgrades, most notably the construction of the new Amon G. Carter Stadium and football offices at a cost of nearly $170 million and and  a $72 million renovation of TCU’s basketball facility.

Texas men are struggling at the line, so Shaka Smart’s helping them focus