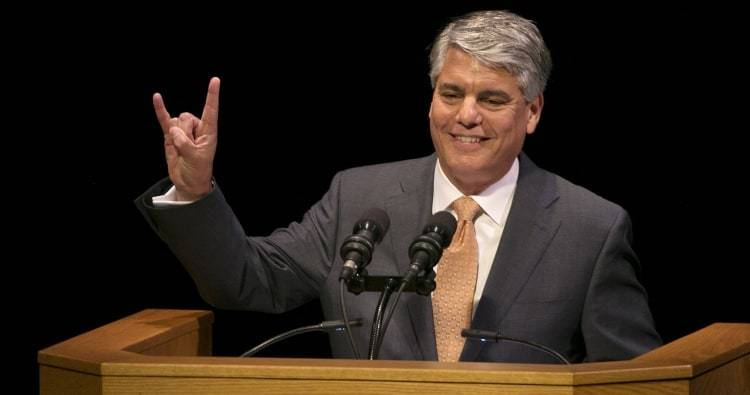 Texas President Gregory L. Fenves released an email to various boosters, staff and fans on Saturday. This following is the text in its entirety:

Many Longhorns see Texas Athletics as a “front door” to the university — an entry point that draws thousands to campus, connects students, alumni and fans to one another, and brings out Longhorn pride. Our student-athletes embody UT’s values on the field, and our coaches represent us to the world as they improve the lives of countless players.

So it is essential that the Athletics Department be guided by a strategic, forward-thinking leader who supports students, elevates the university and strengthens the Longhorn Nation’s ties to the Forty Acres. I am delighted to announce that I have found just that person in Chris Del Conte.

Chris will begin this week as UT’s vice president and athletics director. I will introduce him at a news conference on campus Monday.

He has been highly successful as TCU’s director of intercollegiate athletics since 2009 and before that as athletics director at Rice University. At TCU, he brought the university into the Big 12 Conference and oversaw nationally competitive teams in football and other sports. He upgraded facilities for football, basketball, baseball, track and field and volleyball, among other sports. He increased donations to the athletics department and hired world-class coaches. Most important, under Chris’ leadership, TCU’s student-athletes have been more successful in the classroom than at any time in school history.

Chris has the experience, vision and character that’s needed for Texas to build on the Longhorns’ rich legacy and to continue winning with integrity for years to come. He knows the state of Texas, supports student-athletes and understands the media landscape of college sports, and he is one of the best athletics directors in the country.

He will take over where Mike Perrin leaves off after nearly 2½ years as men’s athletics director. Mike came home to UT in 2015 and quickly restored trust between the Athletics program and fans. He oversaw the construction of a new tennis center and the early plans to relocate the Erwin Center; he hired great coaches in Tom Herman and David Pierce; and he was a trusted partner and friend to me. Mike will stay on as an adviser to Chris Del Conte until at least August, and he will forever have my gratitude and the gratitude of Longhorn Nation.

Starting Monday, Chris Del Conte will work closely with women’s Athletics Director Chris Plonsky as well as Longhorns coaches and the Athletics staff to continue to develop winning teams, improve the fan experience, upgrade facilities and — most of all — support students on the field, in the classroom and after they leave UT. You will see him at the Texas Bowl in a couple of weeks and at competitions involving all Longhorns teams very soon.

I am excited to welcome Chris to Texas as he writes a new chapter in Longhorns history.