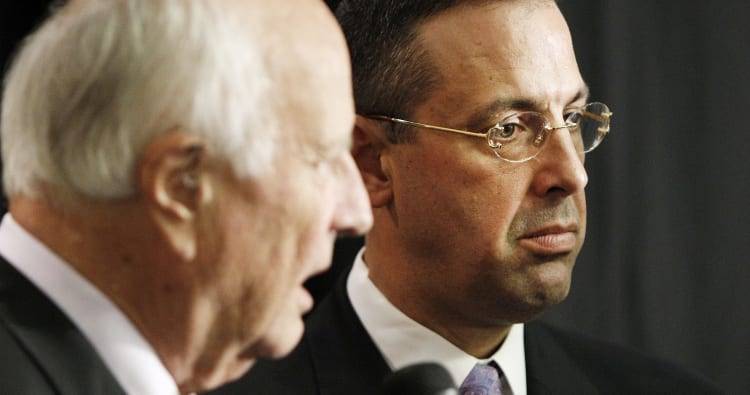 Chris Del Conte’s has a go-to quote whenever folks asked him to summarize his job at TCU.

Starting Monday, it’ll be the University of Texas — 24 hours a day, seven days a week, for sure.

Del Conte will be introduced as UT’s new vice president for intercollegiate athletics during a press conference on Monday.

Cutting through the business card mumbo-jumbo, Del Conte will be the Longhorns’ new athletic director, overseeing both men’s and women’s sports and a financial behemoth that generates almost $200 million annually.

On Sunday, another Big 12 athletic director told the American-Statesman, “Major coup for them.”

Del Conte will win the press conference. Few people have the innate ability to make others instantly comfortable. The 49-year-old is easy-going with billionaires in the suites and those who sit in the upper deck. He even keeps a mental map of where major TCU contributors, big and small, sit on gameday.

At TCU, Del Conte was known for emailing fans directly and being one of the most accessible college administrators around. He’ll be replacing Mike Perrin, who stepped in after Texas fired Steve Patterson after a tumultuous 22 months.

Simply put, Del Conte can become the face of Texas athletics nationally, something the school has sorely lacked. He sat courtside at the Big 12 basketball tournament the last few years and barked at officials. Del Conte can also speak in-depth about major issues facing college athletics — and give you solid reasonings as to his opinions.

Asked what advice he gave Del Conte, former UT men’s Athletic Director DeLoss Dodds said, “Just be quiet on the surface and work 24 hours a day and get to know the people.

“The people inside and the people outside are the key to this,” Dodds said Saturday. “Supporting coaches and going about things the right way. It’s all pretty obvious what you have to do to make this successful, and I think Mike (Perrin) has done a terrific job.”

In an interview with the American-Statesman last January, Del Conte spoke at length about his feelings for football coach Tom Herman. The two were at Rice together from 2007-08; Del Conte was the athletic director, Herman was the Owls’ offensive coordinator.

“What I really admire about Tom is that Tom had a plan,” Del Conte said. “I’m not saying I could have never predicted (Herman’s) success. I’ve also bet on horses that looked beautiful. So I’ve seen that many times, too. But I’ll tell you this, Tom was prepared for the job and was always preparing for this job. Not the University of Texas, per se. But he was always preparing to be a head coach.”

Del Conte also spoke about building an athletic program. When he took the Rice job in June 2006, school officials had seriously contemplated dropping athletics all together. “They had the same bleachers in the stadium when John F. Kennedy spoke there in 1962,” Del Conte said.

Del Conte would help design a new fundraising program at Rice that raised $90 million. That led to multiple facility upgrades. Del Conte was eventually hired at TCU in October 2009.

“If you’re an AD, when I got to a different stadium, I spend two or three hours walking around every stadium, taking notes about what they have and they do,” he said. “I send our marketing staff to look at their in-game (promotions). You’re not necessary keeping up with the Joneses, but you need to know.

“What great facilities do is they help minimize the peaks and valleys,” Del Conte continued. “If you have bad facilities and have a couple of bad years, that could really bury you.”

Del Conte continued his people-focused approach at TCU. Good athletic directors know their main priority is to give coaches everything they need to be successful. If a coach truly needs something, the AD must find a way to make it happen.

“Ultimately, you’re going to be measured by wins and loses,” Del Conte said. “You eliminate the excuses. If you give him this, this, this but not that, they’ll forget the nine things you gave ’em. You galvanize the people around the program.

“You look, we spent $7.5 million on the baseball facility,” he added. “(TCU coach Jim) Schlossnagle not only had the vision, but he sold that vision. He was able to articulate that vision continuously. My job is to just go sell his vision and secure what he needs to be successful.”

Perrin approved $10 million in football facility upgrades, the bulk of which went to a new locker room. Longer term, Texas officials want to expand the south end zone of Royal-Memorial Stadium by adding more suites and a club, not necessarily more seats.

The school has made no real in-roads on a new basketball arena, something expected to easily cost $250 million or more. Nobody is capable of spearheading a major fundraising initiative, school officials said.

The day-to-day business of UT athletics has been fine, school insiders says. But anything major has been put on hold as the department waited for a new, permanent athletic director. Perrin’s tenure was scheduled to end in August 2018.