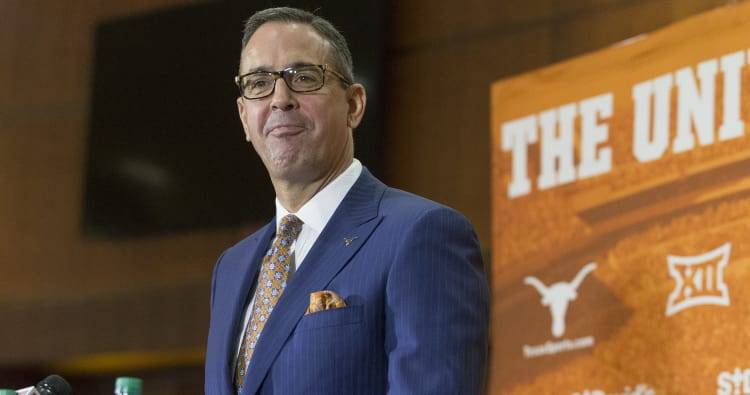 The stealth hiring of Chris Del Conte only solidifies Gregory L. Fenves reputation as one of the most athletic-friendly school presidents in University of Texas history.

When Del Conte arrived, there was Fenves, relaxed with his vodka and soda. Over drinks, Fenves outlined his vision for UT athletics, and Del Conte explained what worked and what didn’t as the athletic director at TCU. Fenves was convinced.

“Incredibly impressed with Chris Del Conte,” Fenves said. “He’s just a genuine human being and that’s who I like to have on my team.”

During a news conference with noticeable electricity, Del Conte expressed a wide range of emotions on his first day as the Longhorns’ new athletic director, one who will oversee both men’s and women’s sports. He’s agreed to a seven-year deal worth approximately $1.3 million annually that must be approved by the UT System Board of Regents.

Plonsky didn’t seem worried about the appearance of a demotion. Texas was the only remaining school in the nation that had both men’s and women’s athletic directors. Fenves downplayed the operational shift, saying it simply streamlines the organization.

Said one influential UT insider, “You know what this proves? Search committees suck.”

What started as a temporary arrangement morphed into a two-year stay. During that time, Perrin smoothed over all the rough patches and generally made few missteps. For that, Fenves praised him and said he “has provided integrity, stability, calmness, helped address a number of problems that were important to solve, and has brought Texas athletics to a new stage.”

Enter Del Conte, 49. He grew up watching his parents start a children’s home on a 147-acre ranch in Taos, N.M. Del Conte and his younger sister and brother essentially had hundreds of sisters and brothers. “It was a very multi-cultural kind of upbringing,” Del Conte’s mother, Michelle, told the Fort Worth Star-Telegram.

Del Conte ran track at UC Santa Barbara and earned his master’s degree from Washington State, where he started a career in athletic administration. Del Conte worked at Cal Poly (1994-98) and Arizona (2000-06) before getting the AD job at Rice (2006-09). He spent the last eight years at TCU.

Along the way, he turned down two offers from brand-name schools. When the Texas opportunity arose, Del Conte turned to his wife and two high-school age daughters. One sent him a text saying, “Life is all about taking risks. If you never take a risk, you’ll never achieve your dream.”

Said Del Conte, “I get one profound statement, eating my Cheerios, the other one says listen to Miley Cyrus, ‘The Climb.’ It will not disappoint. OK, I got that.”

It was long thought that Del Conte was hesitant to force his daughters Sienna and Sophia to change schools. “I think he was excited, but nervous,” his wife Robin said. “UT is so iconic. But TCU has been so good to us for so many years. It’s almost like breaking up and starting over again.”

Del Conte’s TCU family was happy for him. “Today I get a phone call from (TCU football coach) Gary Patterson: ‘I love you, but I hate you today, my man,’” Del Conte said. One of Del Conte’s trusted lieutenants, Jeremiah Donati, was named his replacement in Fort Worth.

Del Conte met with UT coaches earlier Monday morning. Football coach Tom Herman, who worked with Del Conte at Rice, was on the road recruiting. He’s close to signing perhaps the nation’s No. 1-ranked class on Dec. 20. “It’s phenomenal,” Del Conte said of Herman. “He’s going to do a great job for us.”

“His level of passion and willingness to show emotion, excitement and a sense of humor are all things that are really, really exciting,” Smart said. Long-time Florida AD Jeremy Foley, who is now retired, texted Smart and said, “You’re getting a guy who’s the absolute best.”

Can Del Conte raise the quarter-billion necessary to build a new basketball arena? Will he restart the football rivalry against Texas A&M? Can he coax championship-level perfection from UT’s 20 varsity sports?

“Well, I think I just got hired today,” Del Conte said with a laugh. “We’re supposed to ask softball questions in your press conference.” He said reporters are supposed to start easy, “then tomorrow you can take me to the woodshed.

“I think we’ll get to that,” he added. “I do think anything that is done is done to the vision of our president and our coaches and our student-athletes. My job is to carry that out.”