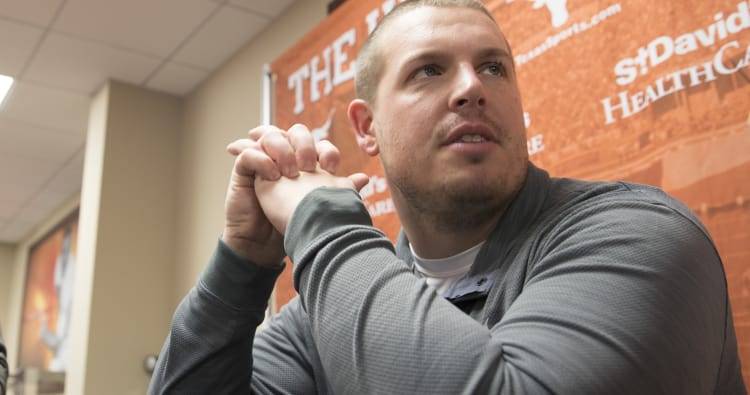 The biggest need remaining for Texas in the 2018 class was the offensive line. Texas added another top-flight prep prospect when 4-star offensive tackle Junior Angilau chose the Longhorns over Utah, Oregon, USC and others. The Salt Lake City East High School product is a national top 200 prospect and the No. 11-ranked offensive lineman in the 2018 class, per 247Sports Composite.

Skill set: Angilau is a big-bodied offensive tackle with a wide wingspan and solid feet. He’s a true offensive tackle prospect because of his sheer size and experience at the position. Angilau is a skilled pass rusher and shows a great punch and quick hands when blocking edge rushers. Like most high school offensive lineman, he must improve his flexibility and add strength to his frame.

He also a bully in the running game and Texas needs more offensive linemen with nasty streaks. Angilau finishes blocks with authority and can handle big defensive linemen in 1-on-1 situations at the point of attack. His athleticism also allows him to get to the second-level in the run game, and help as a pulling blocker on outside runs or in the screen game.

Immediate impact: It’s hard to ask prep offensive linemen to make an immediate impact at the college level because of the difference in size and speed of collegiate defenders. Texas doesn’t exactly have the depth to wait for players like Angilau to develop in the old-fashioned route of a redshirt season, much like Derek Kerstetter was thrust into action as a true freshman.

Angilau is the most college-ready of the three offensive linemen committed to the Longhorns. Asking him to start might be a stretch, but Texas might need him to provide immediate help in the two-deep at the position entering the 2018 season.

Fitting into the program: Texas tends to recruit Texas. Tom Herman and his staff is focusing on the Lone Star State on the recruiting trail, but not at the expense of missing out on key pieces from outside the state’s borders. Angilau became Texas’ fifth out-of-state commitment in the 2018 recruiting class, joining quarterbacks Casey Thompson and Cameron Rising, wide receiver Rondale Moore and linebacker Ayodele Adeoye.