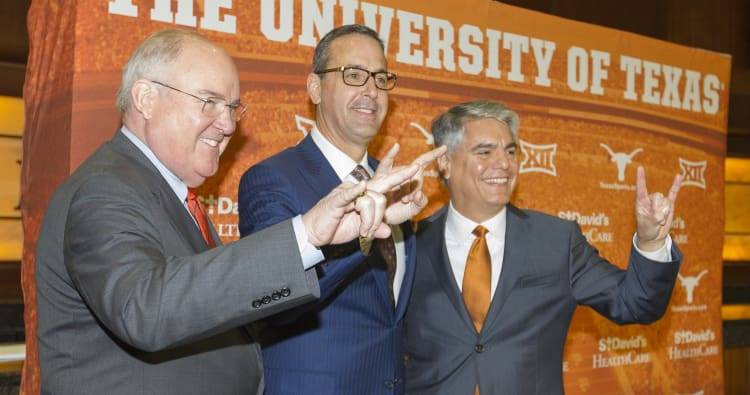 2. Can he mesh with women’s AD Chris Plonsky?

On the surface, it would appear like a major shift is underway now that Del Conte is technically the vice president of intercollegiate athletics. But Del Conte has known Plonsky for years and called her a “star” on Monday. Del Conte is already referring to her as “C.P.,” Plonsky’s widely-used nickname. The women’s teams shouldn’t expect too much change on a day-to-day basis. However, Texas was the only school remaining nationally that had men’s and women’s athletic directors.

Outgoing athletic director Mike Perrin was poised to keep ticket prices the same for 2018. However, the school was looking at making changes to the seat donation requirement. The tax bill that’s winding its way through Congress may force UT to alter course. If passed, fans will no longer be able to count the seat donation cost as a tax deduction. But with ticket plans needing to be finalized soon, it’s hard to imagine Del Conte rising prices as one of his first agenda items.

4. Can he raise money for a new arena?

Football ticket prices not withstanding, Del Conte has shown a terrific knack for raising money for top-level boosters at Rice and TCU. The Frogs had more than $200 million in football and men’s basketball facility expansion, and now the school carries no debt. The Longhorns have a debt schedule totaling $325 million in principal and interest payments stretching through 2044. A new arena could cost $250 million or more.

5. Who will survive UT’s internal Game of Thrones?

Del Conte is well aware that Texas’ biggest wounds have sometimes been self-inflicted. There was constant athletic department infighting under Steve Patterson and that continued with Mike Perrin. Most of it was too inside baseball for the general public to care about. In some instances, staffers simply refuse to speak to one another. Del Conte must cut through all of that and get everyone pulling in the same direction.

This question never goes away. “I think we’ll look at that,” Del Conte said. “Again, I don’t have any comment on that today. I don’t know. I’ll say this. When I listened to Coach (Mack) Brown talk one time, what is college athletics about? It’s about rivalries. He had that quote. Rivalries in college athletics are so important.

“The water cooler conversations on Mondays are awesome,” Del Conte added. “I love the Red River shootout, all that goes on with that OU-Texas game. It is fantastic. Those things are what galvanize. When we stayed in the Big 12, it’s because football and regional rivalries are so important to the community. I know that. I know that. It’s important to everybody.”

Path to the Playoff: Baker Mayfield vs. Georgia Defense