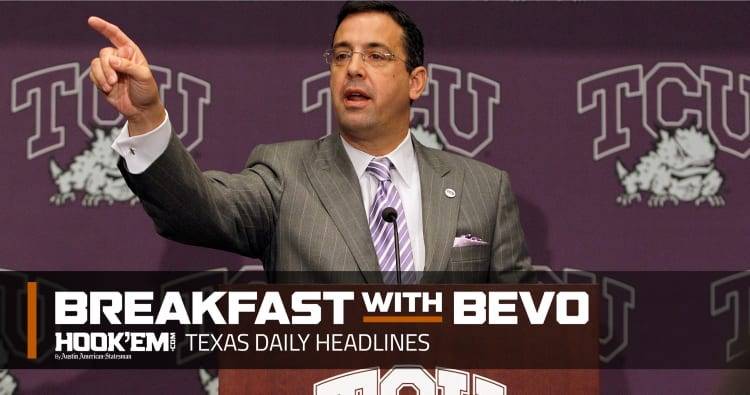 Texas athletics has a new leader

New Texas athletic director Chris Del Conte will be officially introduced Monday at a press conference. The 49-year-old, former TCU head athletics boss was hired to replace Mike Perrin who has served without contract since the firing of Steve Patterson in 2015. With an easy-going nature, Del Conte is known for his attention to detail at his previous stops in his career.

Texas women fall on the road

No. 11 Tennessee outlasted No. 2 Texas 82-75 in a physical matchup of unbeaten teams in Knoxville, Tenn. on Sunday.

Jatarie White, Audrey-Ann Caron-Goudreau and Brooke McCarty all fouled out for the Longhorns. Jordan Hosey didn’t return to the game after getting hurt in the third quarter, and Ariel Atkins missed a key stretch of the fourth quarter with an injury. Atkins returned to the game in the last three minutes and scored a team-high 21 points.

On Saturday, Austin American-Statesman writers Kirk Bohls and Brian Davis broke the news that Chris Del Conte would be coming to Texas to assume the athletic director role.

“I felt it was the ultimate opportunity, the challenge of the job and the legacy of the organization at the University of Texas and what it can be,” Del Conte said in an interview.

Late Saturday, Texas run to the volleyball Final Four came up one match short as the Longhorns were swept by regional host Stanford.

A tale of two programs – comparing Penn State and Texas

The Austin American-Statesman presents a comparison of two teams, a six-year snapshot of two storied college football programs trying to return to glory.

One faced about every disadvantage imaginable and even some that had never been seen before. The other set off on a new path by choice, enjoying just about every advantage a program could have, from a fertile recruiting ground to bulging coffers.