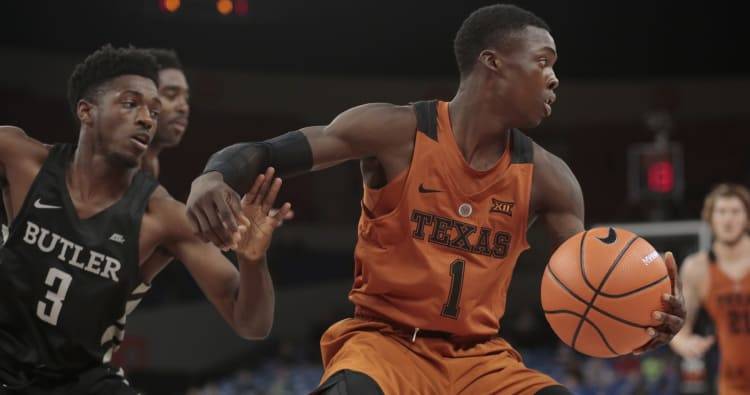 This isn’t what men’s coach Shaka Smart had in mind in the buildup to Tuesday’s home game against Michigan (8-3). Jones, who was averaging 15.3 points per game, fell twice in last week’s win over Virginia Commonwealth and X-rays revealed a hairline fracture.

“Fortunately, it’s not one of those injuries where he should be out an extended, long period of time,” Smart said Monday. “But he’s going to miss at least the next few games here coming up that we have before Christmas.”

Jones is not wearing a cast, so he can still shoot close-range shots. Smart cautioned him not to do anything excessive. The 6-4 guard from Irving is shooting 52.4 percent and 43 percent from beyond the arc.

“In the short-term, it’s one of the reasons that you have a team with depth and why you bring guys in to step up and be part of something larger than themselves,” Smart said.

Tuesday is “Star Wars” night at the Erwin Center. Fans are encouraged to come dressed as their favorite characters. A UT spokesman said there were about 3,000 tickets remaining.

Focus, a trio of Horns must: Davis had 11 points in 21 minutes against VCU and provided some valuable defense. Freshman Jase Febres and sophomore Jacob Young both have played off and on in the first eight games.

Smart said all three will be called upon against the Wolverines.

“All three of them are guys who can come in and contribute,” he said.

Smart spent the early portion of his Monday getting to know the new boss. Del Conte met with all UT coaches at 9 a.m. The hiring will likely be celebrated in Cooley Pavilion. Del Conte is known to be a huge basketball fan. He oversaw massive upgrades to TCU’s basketball arena and helped lure men’s coach Jamie Dixon to Fort Worth.

“I did some reading and learning of his background and the family he comes from (Sunday night),” Smart said. “It was great to hear from him, both in the coaching meeting and in the press conference about the things he values.”

“His leadership at TCU did not go unnoticed among all of us here at Texas and in the Big 12 conference,” Aston said in a statement. “His passion across the board for athletics, including women in sport, is very clear.”

Smart said Del Conte is a “massive hire for Texas.” But he also thanked outgoing AD Mike Perrin, who gave the green light to various upgrades inside Cooley. Texas spent $4.5 million on new practice courts, signage for the walls and a new center-hung scoreboard in the Erwin Center.

The Longhorns hope to have a new basketball floor installed before the Kansas game on Dec. 29. Production and shipping snags have led to the delay, school officials said.

Preview: Michigan vs. Texas on ‘Star Wars’ night at the Erwin Center