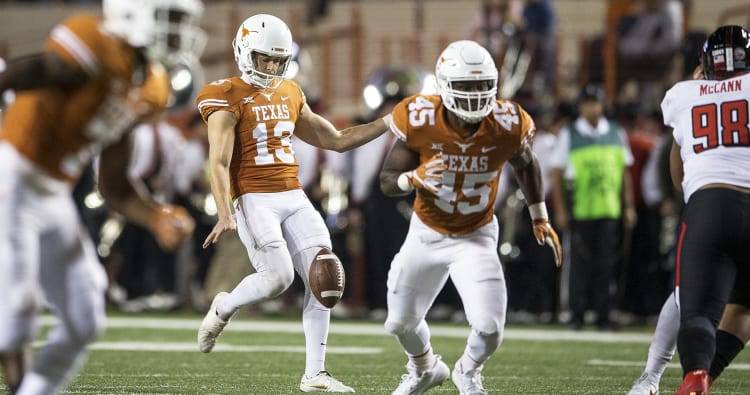 For the first time in eight years, Texas can boast of multiple All-Americans on its roster.

Texas was represented on the first team of the Associated Press’ All-American team by punter Michael Dickson and safety DeShon Elliott. UT linebacker Malik Jefferson was a second-team honoree. Texas last produced more than one All-American in 2009 when Colt McCoy, Jordan Shipley and Earl Thomas were honored.

The Ray Guy Award winner, Dickson is averaging 48.38 yards per punt. Only 17 of Dickson’s 73 punts were returned, and 32 ended up inside the opponent’s 20.

Dickson’s average would re-set the school record he established last year. If Dickson gets off two more punts in the Texas Bowl, he may set a NCAA record for a season-long average over at least 75 punts (Austin Rehkow of Idaho’s 47.8). He is currently just shy of the record for punters with a minimum of 50 punts, which West Virginia’s Todd Sauerbrun set in 1994 when he averaged 48.41 per kick.

Elliott intercepted six passes this fall, and he scored defensive touchdowns against USC and Baylor. He ranked second among the Longhorns with his 63 tackles, and one of his nine pass break-ups was key in UT’s bowl-securing win over West Virginia. Elliott was a finalist for the Jim Thorpe Award, which was won by Alabama’s Minkah Fitzpatrick .

Jefferson led Texas with his 110 tackles. Jefferson, who also recorded four sacks, was named the Big 12’s co-defensive player of the year.

Dickson, Elliott and Jefferson are all juniors. Elliott has already announced that he will enter the NFL Draft and skip UT’s bowl game. Dickson and Jefferson have not yet revealed whether they’ll return to Texas in 2018.

Preview: Michigan vs. Texas on ‘Star Wars’ night at the Erwin Center