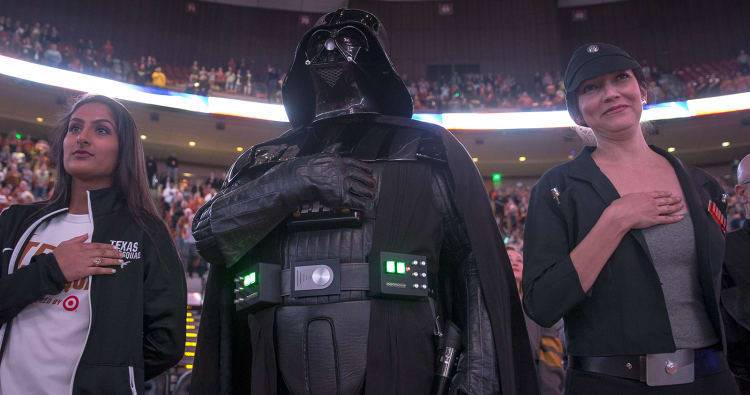 One of the most loathed characters in franchise history probably could’ve helped Texas on the glass against a perky Michigan club that cruised to an easy 59-52 victory.

The Erwin Center crowd never had many chances to crank up the noise. The Longhorns were 7 of 23 shooting in the first half. They got within three points with 14:11 remaining. But the Wolverines went on an 11-0 run highlighted by three 3-pointers and took what felt like a commanding 48-34 lead.

Even when outgoing athletic director Mike Perrin and new AD Chris Del Conte were introduced to the crowd, all the fans mustered was polite applause. They were likely worn down by Michigan’s second chances. The Wolverines had a 39-29 edge on the glass.

After halftime, Dylan Osetkowski cut through the Michigan defense like a burnt-orange lightsaber. He drilled a 3-pointer from the top of the key and then hit an impressive running bank shot and drew a foul, the second of the night. He put in the free throw and had five quick points en route to 17 for the night.

Eric Davis Jr. started in place of the injured Andrew Jones, who has a fractured right wrist. But Kerwin Roach Jr. gave the Horns scoring help with 11 points on 4 of 8 shooting. Jacob Young also helped during a 7-0 spurt that got the Horns back in striking distance in the second half.

Through the game’s first 12 minutes, Texas was 3 for 14 shooting. None of those baskets generated an assist. Jericho Sims missed an easy layup that he could have dunked. Dylan Osetkowski had a terrific spin move off the low block and then missed a gimme.

When the first was was mercifully over, the Longhorns had just 20 points and seven made baskets. Michigan settled in after a rough start and shot 52 percent in the first half en route to a 12-point lead.

You won’t see this in the box score, but there were about 30 NBA scouts in the building. A bunch of them were here to see Mo Bamba, UT’s outstanding freshman. But Bamba was oddly passive in the first half, standing idle at times and watching the action go on without him. Bamba took only five shots in the first half, and two were 3-pointers. High first-round draft picks create their own action. If the draft was Wednesday, he’d definitely fall a few notches.

Texas will start getting accustomed to Big 12 life this weekend when it plays two games in a three-day span. UT first will play Louisiana Tech at 1 p.m. Saturday. Then, it’s a quick turnaround for Tennessee State at 8 p.m. Monday. Neither team should be too much trouble for the Longhorns, but those will be the last cupcakes this team may see the rest of the season.

The post At the buzzer: Michigan 59, Texas 52 appeared first on Hook ‘Em.

Path to the Playoff: Roquan Smith

Michigan 59, Texas 52: The Force awakens within the Wolverines with 2nd-half surge