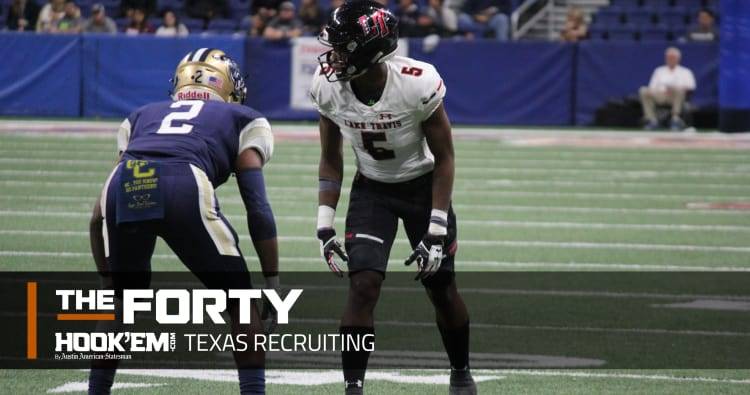 The first available signing period for the 2018 class is less than 10 days away. Not all prospects are expected to sign during the three-day period beginning Dec. 20, instead opting to sign a letter of intent in February.

Blessed to receive a offer from The University of Texas 🤘

A new offer was given to Craig Williams, a 3-star running back from Crosby. The Dec. 11th offer is the latest from Tom Herman and his staff. The Longhorns already hold a commitment from Keaontay Ingram, who might not sign in December because his Carthage program is still in state championship contention.

Williams is committed to Baylor and the Longhorns hope he’ll give Texas a chance before electing to sign with the Bears. Williams is the No. 54-ranked prospect on the Fabulous 55. The 5-9 running back is undersized but extremely athletic. He is one of the top 100-meter dash runners in Texas and is a weapon on special teams.

The top-rated local prospect in the 2019 class is Lake Travis wide receiver Garrett Wilson. The 4-star from the Austin area picked up an offer from the Longhorns after the second round of the state playoffs and it has firmly placed Texas in the mix.

“I’m excited,” Wilson said when asked about the offer after Lake Travis knocked off San Antonio O’Connor in the Class 6A Division I quarterfinals in San Antonio. “That’s a big team and my hometown school. I grew up watching them play, so that is huge. They’re definitely in the top 5. I’m going to go and take some visits to schools like Texas and Arkansas.”

This is big! Beyond blessed to receive an offer from the hometown University of Texas!! #HookEm 🤘

Wilson also listed TCU and Oklahoma State as potential visits, saying he’s searching for a wide-open offense that throws the ball around. If Ohio State offers, the Buckeyes could be in good position since Wilson is from Ohio and Lake Travis quarterback/Buckeyes commit Matthew Baldwin will be on campus by the time Wilson must decide.

Herman’s success recruiting the 2018 class might pay dividends with players like Wilson. He’s convinced the Longhorns are on their way back to prominence.

“The future looks bright. I know some of the dudes in the (2018 recruiting class) and there are some dogs in there,” Wilson said. “I expect them to be at the top of the country in a few seasons.”

Cameron Dicker is ready to compete

The kicking woes at Texas during the 2017 season were well-documented. JUCO transfer Joshua Rowland was inconsistent and was eventually benched during the middle of the season before returning late in the year and hitting a season-long 40-yard field goal against Texas Tech.

The future of the position might be at Lake Travis High School. Cameron Dicker, a long-time 2018 commitment, helped lead his team to the state semifinals. He boasts a big leg, proven when he made a 48-yard attempt at Royal-Memorial Stadium against Converse Judson in the area playoffs.

Dicker will sign with Texas in December and knows the place-kicking job is up for grabs.

“The plan is to compete for the starting spot and play,” Dicker said after the win on Saturday. “If I don’t win it, I’ll redshirt.”

Joshua Moore back in the mix for Texas

Texas has re-offered Yoakum athlete Joshua Moore, the 4-star wide receiver tweeted out Monday night. It’s been an interesting year for Moore, a silky route-runner who was at The Opening Final in Oregon over the summer. The 6-1 wide receiver de-committed from Nebraska on Dec. 10 and is favored to join his twin brother, Jordan, at Texas A&M.

Re-offered by The University Of Texas! #HookEm🤘

Joshua did have a strong relationship with Herman and his staff before the Longhorns searched elsewhere for wide receiver options. With the first signing day approaching, Texas will be aggressive with remaining targets, even if Texas won’t be considered the favorite. Joshua stated that he plans on making an official visit to Texas before deciding, which means he’s likely planning to sign his national letter of intent in February.