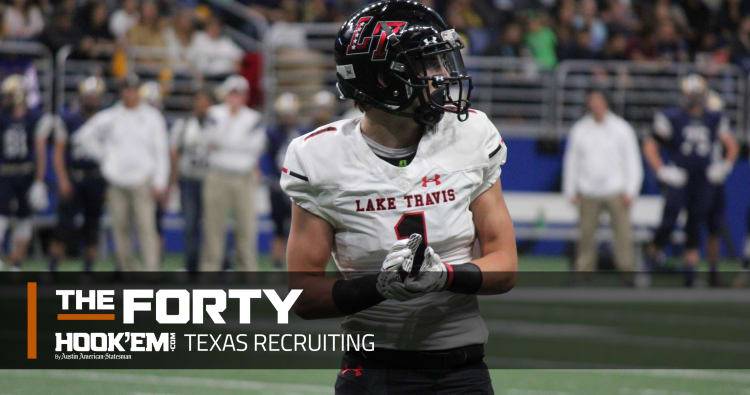 The Longhorns notched their third offensive line commitment of the 2018 class Monday night when Salt Lake City East product Junior Angilau chose Texas over offers from USC, Oregon, Utah and others. He joined in-state commits Reese Moore and Rafiti Ghirmai. Texas would still like to add at least one JUCO offensive tackle to the class before finishing up at offensive line.

The focus after national signing day will shift toward the junior class for 2019, and the Texas staff won’t need to travel far to find an elite offensive line prospect in Brannon Brown, a 4-star junior from San Antonio O’Connor. Brown visited Texas over the summer and holds offers from Big 12 programs Texas Tech and TCU.

“Recruiting slowed down some during the season, but that is expected,” Brown said after his team fell to Lake Travis in the state quarterfinals on Saturday in the Alamodome. “Hopefully this spring the recruiting will pick back up and I’ll get some offers under my belt.

Brown said he’s 6-5 and approaching 300 pounds. He started at right tackle for O’Connor in the defeat, but he sees himself as a future guard who could also help with depth at the center position.

“I want to hear from Texas,” he said. “All of the big schools in Texas would be great, like Texas A&M. I’ll focus on the schools that offer me and contact me the most.”

Brown pointed to education as the top priority on his college list. He also has a clear goal for the offseason.

“I need to improve my speed and my footwork,” he said. “If I can pick up my speed and become better with my feet, I’m not sure what can stop me.”

Hudson Card is the heir apparent at Lake Travis

Lake Travis is attempting to win its second-straight Class 6A Division I title. The Cavaliers advanced to state semifinals on Saturday with a win over San Antonio O’Connor. One of the top playmakers was a future quarterback playing receiver.

Meet Hudson Card. He’s only a sophomore, but has earned a scholarship from Arkansas — the new home of former Lake Travis coach Chad Morris — as a quarterback despite not playing the position as a sophomore. Card plays receiver and is favored to start at quarterback for Lake Travis as a junior after Ohio State commit Matthew Baldwin graduates after this season.

Excited to receive an offer from The University of Arkansas

“It’s been cool to get the offers from places like TCU and SMU, but I’m trying to focus on the season because that is what is most important right now,” he said. “We’re all trying to shoot for state.”

Card went to TCU during the season with teammate and Texas target Garrett Wilson. He plans on becoming more involved in the recruiting process during the offseason when he can focus on playing quarterback again.

“I’m the backup quarterback right now and the plan is for me to be the guy at the position for the next two years,” Card said. “Right now, the offers are for me as an athlete.”

Card grew up in Houston, but he did grow up a Texas fan, giving the Longhorns hope if the offensive staff decides the 6-2 prospect is worthy of a 2020 offer at quarterback. His ability to play receiver proves he can play in a dual-threat offense.

“I’ve always liked Texas. I’ve heard a little bit from them, but nothing serious,” Card said. “I grew up watching the Longhorns.”

One of the remaining uncommitted Fabulous 55 members for the 2018 class won’t sign during the three-day early signing period beginning on Dec. 20. Jaylen Waddle, a 4-star slot receiver out of Houston Bellaire Episcopal, announced on Twitter that he won’t sign until February.

Decided that it is best for me not to sign on December 20th ‼️‼️ pic.twitter.com/Bb1O27Ul4t

That’s good news for the Longhorns. Texas is still chasing the dynamic receiver and this gives the Longhorns more time to work on him. With current slot receiver commit Rondale Moore not expected to sign in the early signing period, Waddle could become priority No. 1 for the Longhorns come January.