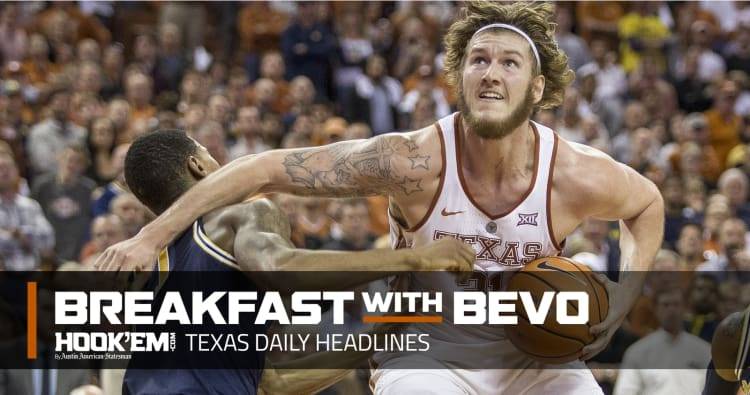 The Longhorns shot just 37 percent as they fell to the Wolverines 59-52 at the Erwin Center on Tuesday. Texas made just 19 of its 52 shots in an ugly performance. Eric Davis Jr. started in place of injured Andrew Jones. He went 0-for-5 in his 23 minutes of action. Freshman Mo Bamba recorded a double-double, but it wasn’t enough. Michigan led by 12 at halftime and kept the Longhorns at arm’s length the rest of the way.

Longhorns new athletic director Chris Del Conte praised Chris Plonsky on his first day on the job. Referring to the women’s longtime athletic director as “C.P.” you could tell the two are friends. Del Conte is now technically Plonsky’s boss since UT moved to a structure like every other athletic program in the country. He is ultimately responsible for both the men’s and women’s athletic programs. Practically speaking, there may be no change in day-to-day operations, according to school officials.

The Longhorns are busy trying to shore up their 2018 recruiting class with an eye on 2019. Recruiting reporter Mike Craven writes that Texas extended a scholarship offer to Craig Williams, a running back from Crosby, on Monday. Despite having committed to Baylor, the Longhorns are hoping Williams will give Texas an opportunity before officially signing. The Longhorns have also offered a scholarship to Joshua Moore, a wide receiver out of Yoakum  who de-committed from Nebraska on Sunday, and the Longhorns expect him to make an official visit. As for 2019, Texas has extended an offer to a local wide receiver who expressed his excitement on social media.

Bevo: The name, the myth, the evolution

He’s been around for 101 years, but do you really know how he got his name? Does anyone? Bevo, the live Longhorns mascot, made his first appearance in the Alcalde alumni magazine in 1916. He made just one appearance that year, at halftime of the homecoming game against Texas A&M.

Longhorns in the NFL: Goodwin still on upswing in Week 14