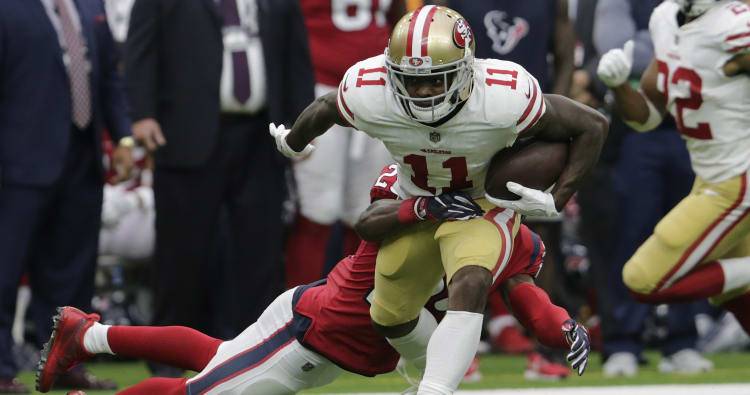 Marquise Goodwin has put up big numbers in each of the last three weeks. With Jimmy Garoppolo starting for San Francisco, Goodwin has started to really shine. He had six catches for 106 yards in the 26-16 win over the Texans on Sunday. Goodwin already has a career-high 783 yards receiving with three games left to go in the season.

Marquise Goodwin on the good win.

Quandre Diggs played a big role in the Lions’ 24-21 win over the Buccaneers Sunday. He had his first career interception and forced a fumble in the win. Diggs also made seven tackles and defended a pass to help keep the Lions’ playoff hopes alive. He has career highs in tackles (45) and tackles for loss (4) already this season. Diggs moved to safety for the win over the Bucs and it paid off.

Earl Thomas made nine tackles to tie for the team lead in the 30-24 loss to the Jaguars. It was the most tackles he made since the season opener, in which he had 11 against the Packers. The Seahawks have interesting ways of trying to earn him a sixth Pro Bowl honor.

With 5 Pro Bowl honors on the resume, 12s can help @Earl_Thomas earn a 6th.

Adrian Phillips, S, Chargers—Phillips made five tackles and a tackle for loss as the Chargers defeated the Redskins 30-13.

Sam Acho, LB, Bears—Acho made five tackles in a somewhat surprising 33-7 win over the Bengals.

Justin Tucker, K, Ravens—Tucker had another strong outing as the Ravens came up just short against the Steelers. Tucker was 5-for-5 on extra points to remain perfect for his career. He also made a field goal from 47 yards.

Phil Dawson, K, Cardinals—He was responsible for every point as the Cardinals outlasted the Titans 12-7. Dawson went 4-for-5 overall on field goals with a long of 47 yards.

Lamarr Houston, LB, Bears—Houston had just one tackle but recorded a sack in the Bears’ win over the Bengals.

Derrick Johnson, LB, Chiefs—He recorded three tackles as the Chiefs got a much-needed win over the Raiders. Here he went Beast Mode on the original.

Brian Robison, DE, Vikings—Robison and the Vikings had their eight-game winning streak come to an end as they fell to the Panthers 31-24. He had two tackles in the game.

Malcom Brown, DT, Patriots—Brown and the Patriots had a surprising loss to the Dolphins on Monday night. He had one tackle in the 27-20 loss.

Brian Orakpo, LB, Titans—Orakpo recorded a sack for the third game in a row, bringing his total to six this year. The Titans fell to the Cardinals, however.

Trey Hopkins, OG, Bengals—Hopkins and the Bengals are in a downward spiral. He and the offense amassed just 70 yards rushing in the loss to the Bears.

Kenny Vaccaro, S, Saints—Vaccaro made three tackles in a 20-17 loss to the Falcons on Thursday night.

Jamaal Charles, RB, Broncos—Charles made three catches for 12 yards in the 23-0 win over the Jets. C.J. Anderson and Devontae Booker have been getting most of the touches out of the backfield.

Malcolm Brown, RB, Rams—Brown returned to action and had one rush for five yards in the 43-35 loss to the Eagles.

Fozzy Whittaker, RB, Panthers—Whittaker played in just eight offensive snaps in the 31-24 win over the Vikings.

Geoff Swaim, TE, Cowboys—Swaim played in 22 offensive snaps, but he hasn’t recorded a catch since Week 8 against the Redskins. The Cowboys topped the Giants 30-10 in Week 14.

Colt McCoy, QB, Redskins—McCoy didn’t make an appearance in the loss to Chargers.

Hassan Ridgeway, DT, Colts—Ridgeway missed his third game due to a shoulder injury. The Colts fell to the Bills 13-7.

RELATED: Longhorns in the NFL: Week 13

The post Longhorns in the NFL: Goodwin still on upswing in Week 14 appeared first on Hook ‘Em.

Michigan 59, Texas 52: The Force awakens within the Wolverines with 2nd-half surge