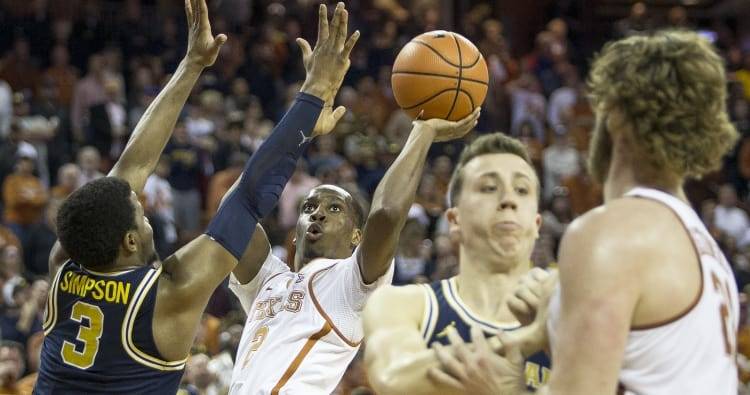 At various points late Tuesday, it was difficult to tell who was who. The Michigan coach sounded just like his Texas counterpart. Neither seemed ecstatic.

Beilein’s Wolverines were the ones relieved after a 59-52 win at the Erwin Center. They took command of a three-point game with an 11-0 run as a bunch of burnt-orange Jedis waived multi-colored lightsabers on “Star Wars” night.

When Muhammad-Ali Abdur-Rahkman hit a jumper with 57 seconds left, the Force was gone. Fans headed to their Millennium Falcons and hit hyperdrive.

As much as Smart would love to blast this game film into a galaxy far, far away, his Longhorns (6-3) will need to watch it and learn. They’ll see how they turned passive at times. Mo Bamba will see himself just standing around watching the action. Eric Davis Jr. will see how he passed on open shots.

Sure, Smart knew things might be different without UT’s leading scorer Andrew Jones. The sophomore, who averaged 15.3 points, will be out for weeks with a hairline fracture in his right wrist. But he probably didn’t expect this. Nor did the players.

“As a collective unit, we’ve got to be a whole lot better than that,” said Dylan Osetkowski, who had a team-high 17 points on 6 of 11 shooting.

Osetkowski opened the second half with his lightsaber. His 3-pointer from the left corner — the same spot where he buried Virginia Commonwealth — cut UT’s deficit down to four. Osetkowski wouldn’t get many chances after that until it was too late, when he forcefully elbowed a guy out of desperation with 1:27 left.

Kerwin Roach Jr. added 11 points, and Bamba put in 10 more. The 6-foot-11 center shot three 3-pointers, which he has the green light to do. But Bamba simply wasn’t aggressive enough down low and hasn’t developed go-to post moves just yet. The 30 NBA scouts in attendance surely took copious notes.

“I can definitely be more aggressive,” Bamba said. “Get fouled more and throw my body around.”

Texas shot 36.5 percent overall and hit only five of 20 shots from beyond the arc. Davis, a Michigan native playing against the flagship school from his home state, scored only one point starting in Jones’ place. “We need more from him. We flat-out do,” Smart said.

If Davis can’t be more aggressive, Smart is likely to give sophomore Jacob Young or freshman Jase Febres those minutes.

The Horns rebounded like a bunch of Ewoks. Bamba had 10 rebounds, something he should be able to do with ease. But Michigan had a 40-31 edge on the glass, which gave the Wolverines plenty of extra juice.

“Star Wars” night meant fans got a free T-shirt with Yoda’s image. Darth Vader and a few Stormtroopers stood at attention during the national anthem. But the UT students got bored early as Texas held a 2-0 through the first four minutes. Ten minutes in, it was still 8-6.

Finally, the Wolverines (9-3) got going as Abdur-Rahkman scored twice and Moritz Wagner scored on Bamba. Michigan had a 24-15 lead. The Horns scored just 20 points in the first half as Smart felt his team got away from what they worked on in practice.

“You’ve got to go take the game from Michigan by following your plan,” Smart said, “and we just didn’t do that.”

Osetkowski’s hot second-half start gave the building some life. Bamba hit a free throw with 14:11 remaining, and Texas trailed 37-34. But Michigan’s young squad figured out what to do, same as it did in a comeback win last Saturday over UCLA.

Charles Matthews hit a 3-pointer. Wagner drilled another and then another. Matthews’ layup with 11:17 remaining gave Michigan a 48-34 lead. Texas had a 7-0 spurt to make it interesting, but the Horns couldn’t get over the hump.

“Really impressed with Texas’ defense today and how hard they play,” Beilein said. “But our kids deserved the win.”

No question. Learn, the Horns must.

“Guys got too deflated,” Smart said. “You’ve got to hang in there. There’s no 10-point plays. You’ve got to keep battling. You’ve got to follow the plan on what we’re trying to do on the offensive end.”

The post Michigan 59, Texas 52: The Force awakens within the Wolverines with 2nd-half surge appeared first on Hook ‘Em.

Longhorns in the NFL: Goodwin still on upswing in Week 14