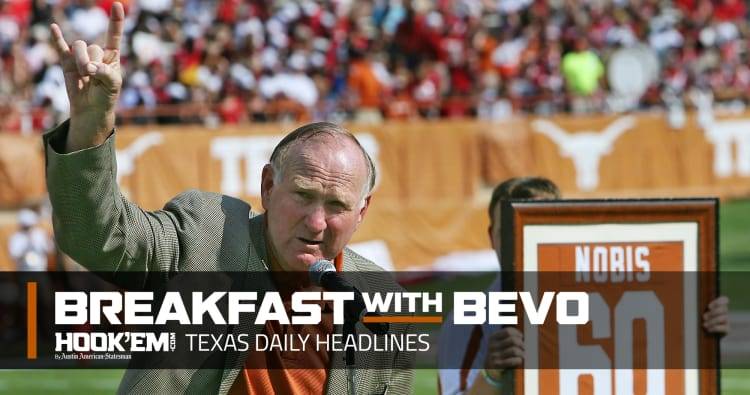 Tommy Nobis, arguably the best linebacker in Texas history, died on Wednesday after a long illness. The Longhorns star, and the first-ever draft pick of the Atlanta Falcons, died in Atlanta with his wife Lynn by his side. American-Statesman columnist Cedric Golden writes that Nobis’s number, 60, was synonymous with greatness at the University of Texas. The two-time All-American struck fear in his opponents and earned admiration from his teammates and fans.

Recruiting updates at The Forty

Texas recruiting reporter Mike Craven has updates on offensive linemen and a couple of receivers in this edition of The Forty. The Longhorns received a commitment from Junior Angilau of Salt Lake City East on Monday. He joins Reese Moore and Rafiti Ghirmai as the third offensive lineman to commit for the 2018 class. After the class of 2018 is shored up, Texas will focus on 2019’s crop of offensive lineman. One such prospect is out of San Antonio O’Connor. Brannon Brown is a 4-star junior that has offers from Texas Tech and TCU.

The Texas women’s basketball team has hit a bit of a lull after falling to Tennessee last weekend. They fought through it on Wednesday as they defeated Northwestern State 68-44 at the Erwin Center. Ariel Atkins had 13 points and 7 rebounds while Jatarie White added 15 points and Jada Underwood scored 11. Brooke McCarty didn’t play with a hip injury.

Texas Longhorns middle blocker Chiaka Ogbogu earned first-team All-America honors for the third time, the American Volleyball Coaches Association announced Wednesday. She’s just the second Longhorns player to achieve that feat. Six Longhorns in all earned honors from the association. Four earned honorable mentions while Micaya White made the third team. Before the Longhorns fell to Stanford in the regional finals of the NCAA tournament, they won 21 matches in a row. They finished with a 27-3 record.

The post Longhorns lose a legend, arguably the best linebacker that ever played at Texas appeared first on Hook ‘Em.