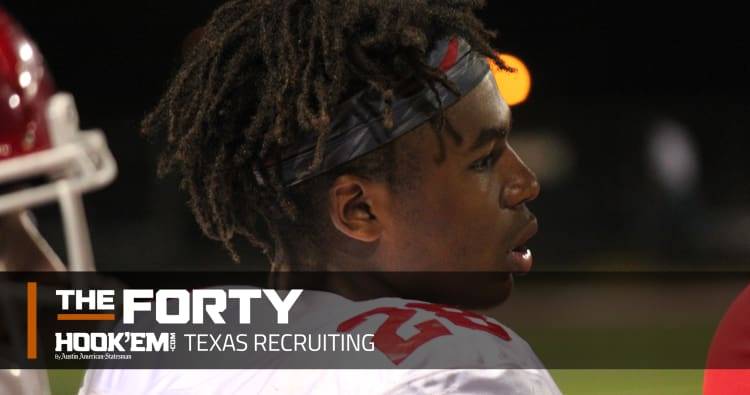 Only three future Longhorns remain in the playoffs after Caden Sterns and Cibolo Steele fell to Westlake in the quarterfinals. Running back Keaontay Ingram, safety B.J. Foster and kicker Cameron Dicker are all one win away from a state title game.

Texas’ 2018 recruiting class ranks second in the nation and first in the Big 12. Of the 14 in-state commits, 12 made the playoffs. Linebacker Byron Hobbs (Fort Worth Eastern Hills) and Brennan Eagles (Alief Taylor) finished their respective seasons in Week 11. Future Longhorns went 3-1 in the state quarterfinals.

Roschon Johnson, Texas’ lone commitment for 2019, made it three rounds deep in the playoffs as a junior.

The Longhorns added commitment No. 19 on Monday with Utah offensive tackle Junior Angilau, who finished his season weeks ago after an 11-3 season and a postseason berth. With Rondale Moore and Cameron Rising also reaching the playoffs in their respective states, 14 of the 19 UT commits reached the postseason.

One of the five who didn’t, linebacker commit Ayodele Adeoye, was part of an undefeated IMG Academy program (Fla.) which doesn’t participate in the state playoffs.

Newbury Park’s season ended last weekend. In nine games, Rising had 1,374 yards and 12 touchdowns to just four interceptions. He completed 56 percent of his passes. On the ground, he added 431 yards and nine touchdowns.

Moore led Trinity to another Class 6A state championship in Kentucky. Entering the game, he had a school-record 99 catches for 1,347 yards and 15 touchdowns. He also added three touchdowns as a rusher, two as a punt returner and one as a passer.

The season ended for Roschon Johnson and Port Neches-Groves over the weekend with a loss to College Station. The Longhorns’ lone 2019 commitment finished his junior season with 65 total touchdowns. The 4-star dual-threat quarterback passed for 2,918 yards and 35 touchdowns, adding 1,627 yards and 29 touchdowns on the ground. His one reception on the season was a 43-yard touchdown.

Path to the Playoff: Alabama