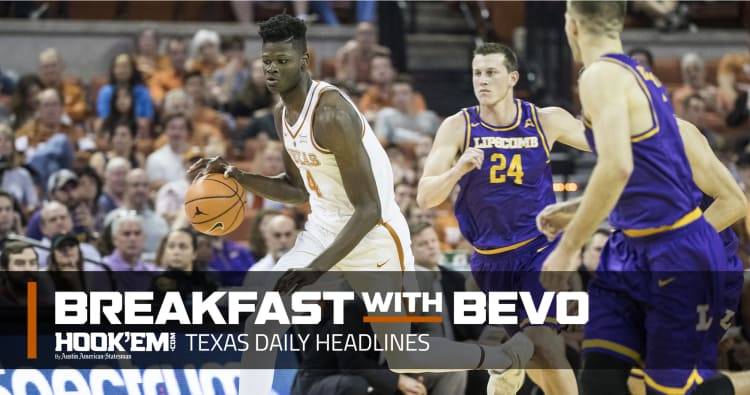 A small adjustment for Mo Bamba can pay off

American-Statesman columnist Cedric Golden thinks Texas freshman Mo Bamba will be great one day. He’s just not there yet. What he can do right now to help the Longhorns is operate as a garbage man of sorts, writes Golden. Rebounding, altering shots and making plays that don’t show up in the stats can help Texas improve its game. A little more aggressiveness can go a long way. Even coach Shaka Smart thinks Bamba can afford to be more aggressive in general.

A guide to watching high school stars committed to Texas

Three in-state high school football players committed to Texas are still alive in the playoffs. Keaontay Ingram, B.J. Foster and Cameron Dicker will all try to qualify for the state final this weekend. Ingram, a 4-star running back, will take his Carthage team to Frisco to take on Waco La Vega in the Class 4A, Division I state semifinals. Foster, a 5-star safety, and Angleton will face Manvel at NRG Stadium in Class 5A, Division I. Dicker, a kicker at Lake Travis, will try to advance over Katy in San Antonio.

Former Longhorns receiver Mike Davis is returning to Austin to take part in the Spring League, an instructional league to showcase pro football talent. The league consists of four teams with players hoping to catch the attention of pro scouts. They’ll compete in practices and a handful of games. The American-Statesman’s Kevin Lyttle first reported the league would come to Austin in March.

The post An aggressive Mo Bamba can do more for Longhorns basketball appeared first on Hook ‘Em.

Path to the Playoff: Alabama