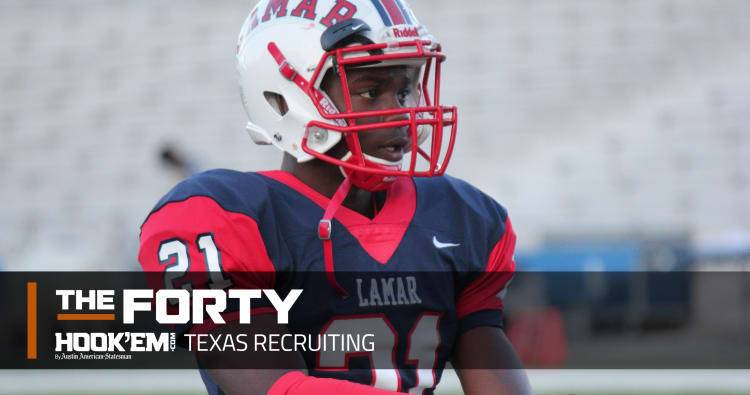 Recruits in the 2018 class can officially begin signing with schools in a three-day period starting Dec. 20. It has sped up an already fast recruiting process. Few of the elite prospects around the country remain uncommitted. And in the state, only eight of the Fabulous 55 members are uncommitted.

Texas, for example, has 19 commitments heading into this final weekend before the signing period. Texas A&M has 15, which is one the low side because of the recent coaching change. TCU and Baylor each sit at 20. There aren’t a ton of spots left at Power 5 programs and most of the 2018 class is expected to sign next week.

Expect a ton of commitments to take place over the weekend as final official visits before the first signing period take place. The Longhorns are expected to host a handful of key targets along with current commits like DeMarvion Overshown. B.J. Foster is expected to visit Austin on Sunday since the state playoffs have prevented him from taking an official visit.

The top uncommitted prospect remaining in Texas is 5-star cornerback Anthony Cook. The 6-1 defender will announce his decision at Houston Lamar on Dec. 20. He’ll choose between the Longhorns, LSU and Ohio State. Texas is considered the favorite.

While most of the remaining uncommitted Fab 55 prospects are destined to choose schools and sign over the next week, at least a few are deciding to wait until the traditional national signing day in February. Texas isn’t expected to sign out-of-state commit Rondale Moore or in-state defensive tackle commit Keondre Coburn until February.

Jaylen Waddle, a 4-star slot receiver who holds a Texas offer, is one of the uncommitted members of Fab 55 who won’t sign next week, he announced earlier in the week on Twitter.

Carthage running back Keaontay Ingram is one of a few UT commits not expected to sign during the three-day early signing period. That means schools will be able to recruit him up until the next signing period in February. At least one SEC power is throwing its name in the hat after Auburn offered the 4-star prospect Thursday afternoon.

Blessed to receive an offer from Auburn !!!! pic.twitter.com/nhwBGiJ39u

Texas commits Rondale Moore and Keondre Coburn are also expected to wait until February. Jalen Green and Rafiti Ghirmai are still deciding, while the other 14 members of the class are expected to sign during the early signing period.

An aggressive Mo Bamba can do more for Longhorns basketball