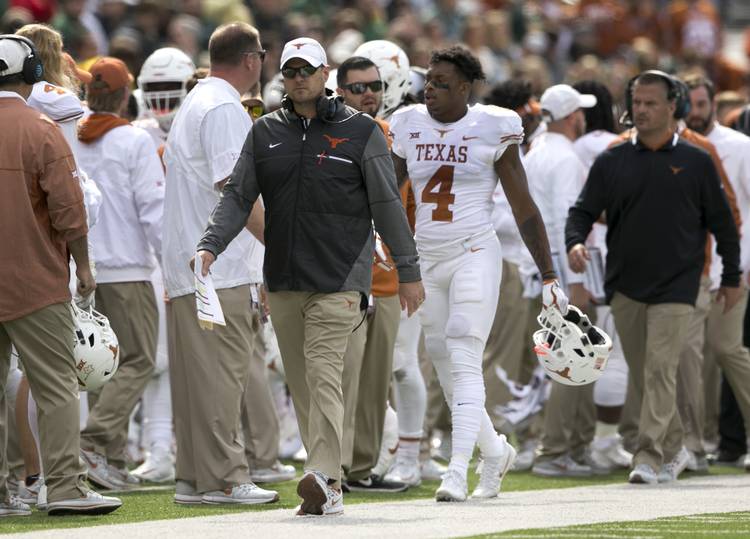 UT head coach Tom Herman on the sidelines against the Baylor Bears at McLane Stadium in Waco on Saturday October 28, 2017. JAY JANNER / AMERICAN-STATESMAN

Texas coach Tom Herman has been jetting around the country in recent days trying to sew up a top-five recruiting class. He’s thankful for private planes as middle seats and “C” boarding passes make life miserable.

The week started Sunday in Los Angeles, then on to Salt Lake City and back home to Austin. On Tuesday, he was off to Louisville, Ky., then down to Bradenton, Fla., and back over to Houston. Thursday, he made it to Shreveport, La., and Dallas before coming back to Austin.

College football’s new early signing period begins Wednesday, and Herman hopes to sign three-fourths of a full class. But he’s also got big personnel questions facing him now as the Longhorns prepare for the Texas Bowl on Dec. 27.

Asked if Jefferson was going to play against Missouri, Herman said, “We haven’t really talked about it. This is my first real day off the road, so a bunch of those guys will come in here and talk to me this weekend.”

On the flip side, the Longhorns are expecting reinforcements. Right tackle Elijah Rodriguez, who missed the regular season with a right ankle injury, has been practicing. He’s likely to play since Rodriguez redshirted in 2014.

Vahe joked that he’d love to have Williams return for the bowl game, but Williams is a likely first-round pick in the 2018 NFL Draft. “It would have been nice for him to stay, but I’m really happy for him and this path he’s going down,” Vahe said. “I’m just being a supportive brother for him.”

The Horns used Denzel Okafor and Tristan Nickelson at left tackle for about half the season as Williams was sidelined with a knee injury.

Herman said P.J. Locke III, who missed the final four games with an ankle injury, could play Elliott’s position in the bowl game. Cornerback Antwaun Davis is working at the nickel position in practice. Safety Jason Hall is also practicing closer to the line of scrimmage, Herman said. “He’s kind of found a home there, too.”

Quarterback reset: Neither Shane Buechele nor Sam Ehlinger have an edge at quarterback, apparently. At this point, trying to pick who will start again the Tigers (7-5) is merely a guessing game.

UT’s 15 bowl practices and the Texas Bowl is both quarterbacks’ final chance to impress the coaching staff. The Longhorns are expected to sign highly-touted prospects Cameron Rising and Casey Thompson, and both plan to enroll in January.

The quarterback competition will be wide open during spring drills.

No coaching changes: Herman said he expects all nine assistants currently on staff to say with Texas for 2018. That includes defensive coordinator Todd Orlando. Herman attempted to shoot down reports that Orlando had interviewed at SMU earlier this month. Former Cal coach Sonny Dykes got the SMU job.

“All of our guys will be here next year,” Herman said. “None of them have approached with me with any jobs, despite reports.”

All colleges are eligible to hire a 10th assistant coach in January, thanks to a NCAA rule change. Herman said he hasn’t decided if that will be an offensive or defensive coach. It could wind up being the “best available,” Herman said.

Meet the new boss: Herman worked with new Texas athletic director Chris Del Conte when the two were at Rice from 2007-08. Now together again, the two men are charged with leading the Longhorns back to national prominence.

Herman said he and Del Conte have spoken via phone practically every day. They had their first face-to-face meeting on Thursday.

“Really excited,” Herman said. “Excited for a guy with his proven track record, with his leadership skills, his vision. The things that he did at Rice and at TCU are unprecedented. I’m really excited to start working with him.”

Path to the Playoff: Deep South

Countdown to signing day: Texas has used family, tradition to build its class