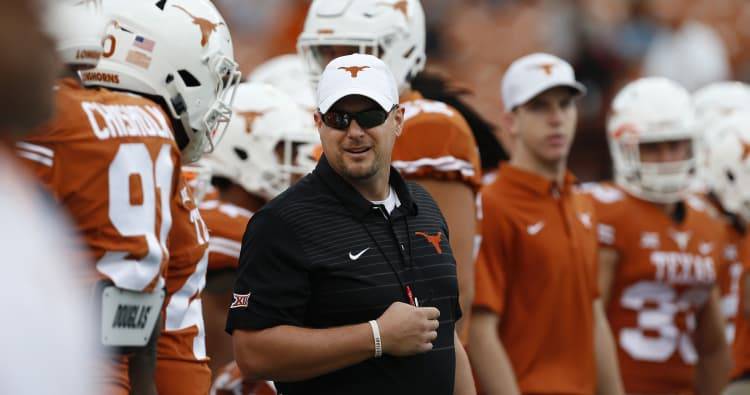 College recruiting is a form of courtship.

The dating begins at offseason camps and events. The relationship heats up during the season, as coaches  become more involved with the players and meet the parents. On Dec. 20, prospects in the 2018 class can finally throw away those engagement rings in exchange for a national letter of intent.

During the process, the two things most recruits are looking for — along with early playing time — are family and trust. Tom Herman inherited a team coming off another losing season. He had only two months to recruit and signed a class that wasn’t ranked in the top 20. Questions swirled about his ability to recruit at an elite level.

Those questions have been emphatically answered. Herman and his staff managed to cobble together one of the best classes in the nation despite a 6-6 regular season.

For the first time, all prospects from that year’s recruiting class can sign with schools nearly two months before the traditional national signing day, which is the first Wednesday in February. The new early signing day is a three-day window beginning Wednesday.

Texas, which has 19 commitments for the 2018 class, expects a big chunk of the class to sign on Wednesday. Final class rankings won’t be determined until after the second signing day in February. Texas’ current class is No. 2 in the country, trailing only Ohio State.

The reason is simple: Herman has relied on family and the promise of returning Texas back to glory. It seemingly has worked.

“Texas did a great job including my whole family in the recruiting process,” said Fort Worth Eastern Hills’ Byron Hobbs, a 3-star linebacker

. They made it clear that any time I came to campus that my whole family was invited to campus,” said 3-star linebacker commit Byron Hobbs, Texas’ longest-standing commitment; he pledged on April 7. “Those coaches are going to be my parents away from home and my whole family needed to trust them with the next four or five years of my life.”

“I know where I want to go, so I’m excited to have the process over with,” said Seminole offensive line commit Reese Moore. “For some guys I’m sure it is stressful if a coach wants you to make a decision by December instead of February. My mind was made up a long time ago, so I’m ready to sign.”

The only players in Texas’ class who aren’t expected to sign this week are Kentucky wide receiver Rondale Moore and Spring Westfield defensive tackle Keondre Coburn. Commits like Jalen Green, Rafiti Ghirmai and Keaontay Ingram are still deciding whether to sign in February or to get the process over with in December.

Ingram, for example, is still participating in the state playoffs and could be playing for a state championship with his Carthage teammates during the time that recruits are signing national letters of intent. Of the group not expected to sign, only Moore is considered a prospect who will still look around in January.

“It’s tough to worry about signing day and recruiting when we’re trying to win another state championship,” Ingram said. “Recruiting isn’t my main priority right now since we’re still in the playoffs.”

Texas holds 19 commitments heading into the first signing day. The Longhorns are still actively searching for a JUCO offensive tackle to provide immediate help replacing Connor Williams at left tackle. It’s the top-ranked class in the Big 12 by a mile and there are still a few spots left for the Longhorns to fill, even if that means recruiting the 2018 prospects who don’t sign early come January.

Herman’s 2017 class seems like a lifetime ago. He missed out on elite in-state prospects to out-of-state schools down the stretch. K’Lavon Chaisson chose LSU over Texas on national signing day. Westlake outside linebacker Levi Jones chose USC instead of staying in Austin.

But the 2018 class has been another story. And it could get even better if Texas can secure Houston Lamar cornerback Anthony Cook, a 5-star prospect and the top-rated player in the state on the American-Statesman’s Fabulous 55. Cook will sign on Wednesday with either Texas, Ohio State or LSU.

Texas missed out on each of the top 10 players on the 2017 Fab 55; getting Cook would give the Longhorns the top five prospects in the state for 2018.

“We’re coming to Texas to help coach Herman change the culture at Texas,” said 5-star safety B.J. Foster. “Most of us grew up with the Longhorns as one of the top teams in the nation every year. Our goal is to help the program get back to that by the time we leave campus.”

The post Countdown to signing day: Texas has used family, tradition to build its class appeared first on Hook ‘Em.