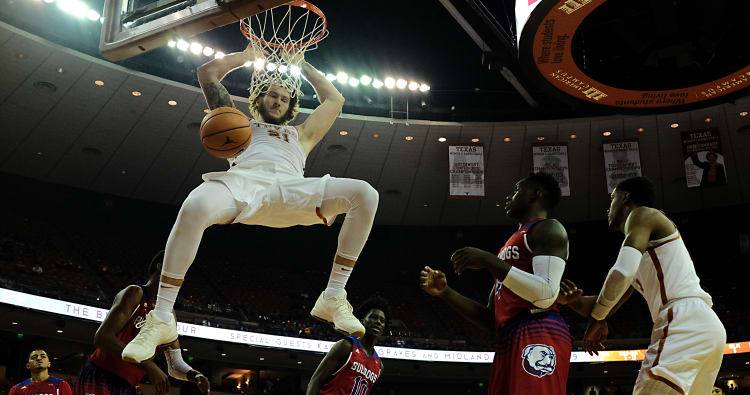 Mo Bamba’s best basketball days will come long after he’s left Texas. He’ll be dunking in New York, Chicago or Los Angeles, and Longhorns fans will reminisce about that one year he wore burnt orange.

While Bamba is here, the Texas freshman should follow Dylan Osetkowski.

One-and-dones are great, and every coach wants them. But the junior forward is a hairy-faced example of how a few years of good coaching and player development can work wonders.

Osetkowski, the guy who had only one Division I scholarship offer in high school, has scored at least 17 points in four consecutive games. On Saturday, he poured in a career-high 22 while everyone else was struggling against Louisiana Tech.

Despite playing with foul trouble, Bamba scored three buckets that essentially secured a 75-60 win at the Erwin Center. The Horns are now 7-3. But it doesn’t happen without Osetkowski, who is blossoming into UT’s true floor leader.

“Just for the record,” Osetkowski said of Bamba, “he was aggressive from the beginning of the game. We drew a play up for me, and he shot a three.”

Asked where the Longhorns would be without Osetkowski, coach Shaka Smart said, “Oh, it’d be completely different. I don’t want to put those negative things in the universe.”

Osetkowski is unlike any other Longhorn in recent years. He can rib teammates while acknowledging his own mistakes. He can find Bamba or Jericho Sims down low or kick to the guards on the perimeter, like he did in finding Jacob Young who drilled a 3-pointer with 2:59 left.

College basketball has become enamored with the talented freshmen who make one-year stopovers before going to the NBA. That’s no knock on Bamba. He showed flashes of brilliance late and finished with 14 points, nine rebounds and five blocks — a dynamite scoring line for just 18 minutes.

But Osetkowski is making glue plays that savvy veterans know how to make. Like when he found freshman Jericho Sims. Osetkowski got the ball to Sims, who made a fluid catch-and-score motion and drew the foul.

That play, along with Bamba’s outburst, fueled a 10-2 run that gave the Horns breathing room. The Bulldogs (7-4) had made it a four-point game.

Nobody in Cooley Pavilion will excuse Osetkowski’s seven turnovers. But he was 3 for 5 shooting from 3-point range and had seven rebounds in an all-out hustling 38 minutes.

“He’s probably our most important player from the standpoint of just all the things he does,” Smart said. “He’s like a connective tissue for us. He brings a lot of things together.”

For his part, the eye test indicates that Sims is getting better game by game. He could be another program player that wins a lot of games at Texas. The quiet forward from Minnesota finished with nine points and eight rebounds, both season highs.

“This is what I came here to do,” Sims said in his longest interview session at UT yet.

In fact, Smart played all three big men together in the second half, which created a lineup with intriguing possibilities. Imagine if the Horns played Matt Coleman at point guard, Andrew Jones (still out with a fractured wrist) at shooting guard and Sims, Osetkowski and Bamba?

“It would be a whole world of problems for the opposition,” Bamba said.

Wrist injuries continue to be a problem for the Longhorns, too. Eric Davis Jr. suffered a right wrist injury in Thursday’s practice and did not play against the Bulldogs. Smart gave no indication whether Davis could play Monday against Tennessee State.

Without Jones and Davis, Smart gave the starting nod to Young, who had 10 points on one of his better nights of the season. Young was 4 for 9 shooting. Coleman was the one with another puzzling stat line — seven points, four assists and four turnovers in 32 minutes.

Still, the guards simply need to get the ball to UT’s big men. Or, worst case scenario, get it to Osetkowski and let him direct traffic.

“I can tell them as much as they want to hear. But I think it’s important that we feed these guys,” Osetkowski said of Bamba and Sims. “If we can get them the ball in the right places, good things are going to happen.”